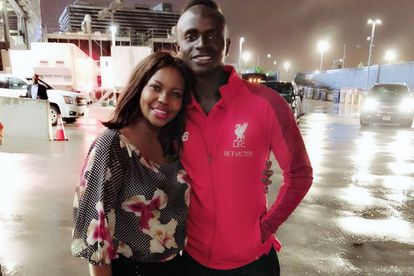 Carol Tshabalala is smiling for days after announcing her engagement. And many think it has to do with a certain Liverpool soccer player…

The “first lady of sports” revealed that her partner had popped the question, in which she gladly accepted.

But as happy as fans are for the renowned sports presenter, they also desperately want to know who the lucky man is…

Carol has kept her private life off social media since her split from first husband Solomon Manana.

The Supersport presenter married her first husband at age 19.  The pair divorced in 2005, but reunited just a year later.

Following allegations made by Carol that Solomon was “physically and emotionally abused” during their marriage, the couple split for good. They share two sons together.

Since then Carol has kept a low profile but has been secretly romantically linked to businessman Sbu “Sbuda” Motloung and most recently Senegalese soccer player Sadio Mane .

Taking to Instagram, the 39-year-old shared a snap of her diamond ring. She wrote: “My fiancé has impeccable taste! Only the best”

Carol captioned the post: “Here’s to being Mrs S. I love you now and forever more”.

Whilst Carol Tshabalala has vowed not to kiss and tell, many fans are speculating that her mystery future husband is actually soccer player Sadio Mane.

According to reports, Carol Tshabala and the Liverpool player kicked off a romantic relationship in 2018 after she interviewed him about his rags to riches story.

In 2020, Carol shared several images of her with the popular player on her Instagram, although she refrained from giving context.

And to add fuel to fire, Carol has also posted pic of a mystery man, with his face hidden!

Neither Carol nor Sadio have spoken out about their rumoured relationship.