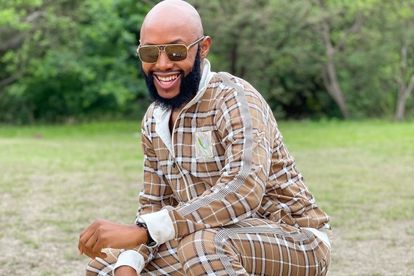 Actor and radio personality Mohale Motaung asked Mzansi to help him find a mystery man that helped after he hit a pothole on 15 February and Tweeps understood the assignment.

Mohale Motaung hit a pothole on 15 February and a man stopped by to help him. The radio personality seems to have caught a little crush and asked Tweeps to help him locate the man. Take a look…

“Just hit a pothole and my tyre is messed up!” he tweeted.

“There was a gent that came to ask me if I’m okay after I hit a pothole yesterday. This was on the corner of Old Pretoria Road and Maxwell In Waterfall – I didn’t even get his name. Akamhle 😭😍. Please RT, he might be on your TL – I just wanna check up on him,” he tweeted.

It appears the Tweeps came through for Mohale as he confessed that he received a Direct Message (DM) and he will be keeping his fans updated.

“I just got a DM. Y’all did the things! I’ll keep y’all updated,” he tweeted.

THE LATEST ON THE ‘SOMHALE’S’ DIVORCE

Mohale Motaung announced his divorce from media personality Somizi Mhlongo in August 2021. This followed the leaked audio clips of Mohale’s alleged confessions from his marriage to Somizi which included abuse allegations.

Mohale and Somizi have not yet revealed whether their divorce is final but they’re both attempting to move on. Somizi addressed the abuse allegations on 16 February at a press conference for Idols SA.

ALSO READ: ‘Actually, I was dizzy’: Mohale Motaung on his marriage to Somizi