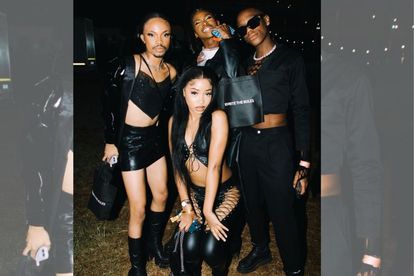 Uncle Waffles and her fans have taken to Twitter to rubbish transgender rumours which started on Facebook yesterday.

The popular DJ’s fans shared childhood pictures of her dressed in her school uniform and she’s also addressed reports in a series of tweets.

“I’m a proud ally of the trans community, always have been.”

UNCLE WAFFLES: ‘WHAT DO THESE PICTURES PROOF?’

DJ Uncle Waffles fans took to Twitter 12 hours ago to respond to rumours she is transgender. The amapiano DJ herself told gossip mongers to back off on the platform.

The star topped Twitter trends on Wednesday after pictures of her and her dancers at Cotton Fest were shared on social media.

“Real question. What do these pictures prove? Instead, you’re trying to bring down people who have nothing to do with this.”

“I now have to prove my gender based on my physique and based on a rumour? You guys are so weird.”

The 22-year-old also added that she is an “ally of the trans community and always has been.”

“Y’all, without fail will always have something to say.”

She also topped Twitter trends in March and April after Drake appeared on her Instagram Live and shared her posts on his IG stories.

HER FANS REACT TO HER TRANSGENDER RUMOURS

“Celebrities can’t live in peace, someone on Facebook woke up and decided to tell everyone that Uncle Waffles is a transgender.”

“Thanks for the clarity, everyone was starting to look at her boobs.”

“Uncle Waffles is a 2000 and already she’s receiving so much hate from people who are way older than her.”

“They want Drake to lose daiding for u ba jealous.”

“People will say weird shit at any given time coz you’re a public figure now Malume..”

“When you want rain deal with the mud too.”

ALSO READ:‘He’s in love’: Mihlali gets trolled after Drake tags Uncle Waffles on his IG