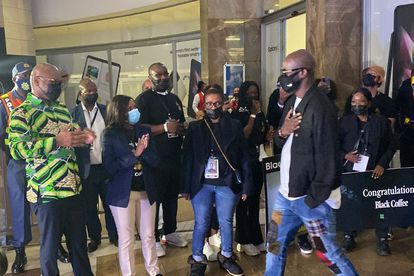 Black Coffee arrives at OR Tambo on Tuesday night to a hero’s welcome.
Image via Twitter
@NathiMthethwaSA

Black Coffee arrives at OR Tambo on Tuesday night to a hero’s welcome.
Image via Twitter
@NathiMthethwaSA

Black Coffee touched down in South Africa at O.R. Tambo airport late on Tuesday night after his Grammy win in Las Vegas on Sunday night.

And greeting the world famous DJ – and now Grammy-award winning one – was a huge crowd including friends, family and even Arts and Culture Minister Nathi Mthethwa minister.

The local star – who won an award for his album Subconsciously in the “Best Dance” category – was overwhelmed at being on the end of a “hero’s welcome”.

BLACK COFFEE THANKS FANS AND HIS MOM

Speaking to the crowd, Black Coffee revealed his current state of mind.

He said, fighting back emotion: “I’m so overwhelmed right now, it’s such a crazy feeling. I’m seeing the love, I’m seeing the support, it’s like I’m watching from somewhere [else].

“It’s like magic. I wish I could get back on the plane and fly around the continent and sprinkle it so everyone can feel this feeling”.

Black Coffee then reflected on his humble beginnings, including the birth of his firstborn son Esona. The 23-year-old budding artist accompanied his dad to the awards, and on the stage where he collected his first-ever Grammy.

He said: “I had him when I was in university and my family was mad, my mom was mad, as she should be.

“I had no means of having a child that young. I used to take buses to go see him in the Eastern Cape and spend a day and take a bus back. Reflecting on walking with him on stage to go collect a Grammy was so unreal”.

He also shared an inspirational message with the crowd.

He continued: “I just want to say to all the kids that believe you can be anything in the world, despite your environment. It may sound cliché, but it is possible. All you have to do is be resilient and have faith.

“That is my mother’s name [Faith]. I was aware of that growing up…It’s taken me so far and is a word that is rooted in my heart. I’m not self-made and I say this all the time. I didn’t do this album alone”.

‘SON OF THE SOIL’

Minister of Arts and Culture Nathi Mthethwa also addressed the crowd, hailing Black Coffee as the “son of the soil”.

He said, addressing the muso: “Welcome home, my brother, son of the soil. We know you went to the world to represent us and you use your gift of music to share it with the world and to unite us as South Africans, unite us with the people of the world. We are grateful you are here today. You’ve done a lot of things, you’ve collaborated with the best in the world who understand and trusted your ability to know a good song.

He continued: “Following in the footsteps of Miriam Makeba and Hugh Masekela, DJ Black Coffee has reached the top of his game and will continue to shine. You are an icon and your love for music and youth should continue for years to come.’

“You are an inspiration for all young artists, they look up to you and will continue in your footsteps.”