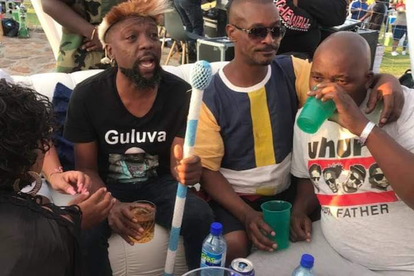 This photo of Zola 7 drinking does not sit well with some South Africans. Image via Twitter: @KingDon_za

This photo of Zola 7 drinking does not sit well with some South Africans. Image via Twitter: @KingDon_za

Just a few months ago, South Africans were left deeply concerned about media personality and kwaito artist Bonginkosi Dlamini who is well known by his stage name Zola 7 after he was recorded looking frail and unhealthy. Soon enough, donations started pouring in as celebs and citizens joined hands to help the star return to his former glory.

It appears he is already doing better and is back to enjoying drinks with his friends – but this doesn’t seem to be sitting well with some South Africans who feel like he is “drinking the donation money”.

South Africans have been left with mixed reactions after a photo surfaced online of Zola 7 enjoying a drink with his friends. The photo appears to have been taken at the Strictly Kwaito Legends concert that Zola hosted last weekend in Mpumalanga.

While some people feel like he should be allowed to enjoy drinks if he wants to, others have said that he is wrong for “drinking his donation money”.

Taking to Twitter, one user with the handle, @voxx_propeller took to Twitter on 3 April this year and wrote:

“Zola 7 was just asking for donations the other day and here he is drinking alcohol with the same donation money.”

“This doesn’t look good, he was supposed to be relaxing in his home or helping people not public drinking after we felt sorry 4 him, so he was broke no friends now uvukile babuyile?”

Not everyone thought that Zola was wrong to be enjoying a drink – especially since he didn’t exactly ask for the donations which were offered to him.

“Can I humbly correct you, he didn’t ask for donations. He accepted donations from people who were willingly giving him money❤️”

“People must Zola now live in a glasshouse where his monitored cause you donated. When he was helping people you never said he drinks and helps people, manje cause he has challenges he must be a child. Hai people reserve your judgment.”

ALSO READ: ‘It all starts with you’: Somizi drops some pearls of wisdom for Zola 7