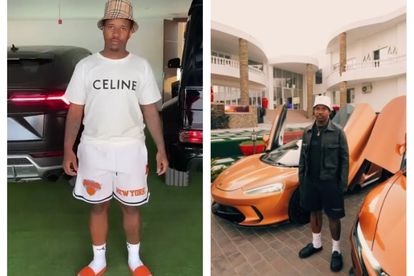 Andile Mpisane has been chastised for flaunting his luxury cars again on social media.
Image via Instagram
@andilempisane10

Andile Mpisane has been chastised for flaunting his luxury cars again on social media.
Image via Instagram
@andilempisane10

With soaring petrol prices and the ripple effects on the economy, many South Africans are rethinking the necessity – and crippling expense – of using their cars. On the flip side, you have celebs like Andile Mpisane who is left scratching his head over his expansive fleet of luxury cars.

In a clip that has gone viral on social media,  the Royal AM chairperson and muso brags about being “undecided” on which car to drive that day.

But many tweeps are not impressed with the obvious flaunting of a flashy lifestyle, labeling it “nice life problems”.

In the video, Andile Mpisane seems torn over which luxury ride he should choose between a Mercedes G-Wagon or a Lamborghini Urus.

In a clip filmed for Instagram, Andile asks: “Should I go with this one or that one?” Eventually, he picks the shiny black G Wagon, which is valued at an eye-watering R3 million and above.

In another Instagram post, Andile Mpisane shows off two more cars; a gold chrome McLaren and a BMW i8, set against the backdrop of his family’s sprawling mansion.

He captioned the post: “I’m in a different league”.

Whilst Andile Mpisane’s wealthy is indeed in a league of South Africa’s elite, ordinary South Africans on social media were not impressed.

@Dimakai: “Andile has nice life problems. We are stressing about expensive petrol prices and the high cost of living”

@Tsungai_: “Me deciding which orange sack to buy from a street vendor”

@rutenga1: “I am pained that there is even a Merc GLE coupe on the side which wasn’t even part of his dilemma. He totally ignored it, yikes!”

@MaabuleM: “I know I’m broke and probably shouldn’t have an opinion about rich people as others would say. But Andile Mpisane is not happy and it’s sad. The attention he’s seeking it’s not given”

All of this won’t matter in heaven. pic.twitter.com/GJ74NwpChQ

Some tweeps went a step further and claimed that money “can’t buy you everything”, mocking Andile Mpisane’s speech and mannerisms.