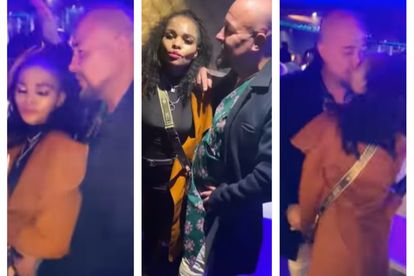 Pictures and clips of Jamie Bartlett seen in a nightclub on his last evening alive have been posted on social media by his girlfriend Rosa Onious.

The actor died of a heart attack last month after his partner discovered him lying unresponsive on a couch after an afternoon nap.

JAMIE BARTLETT SEEN IN CLUB ON EVE OF DEATH

Despite tragically losing his life on Monday 23 May, Jamie Bartlett was seen in high spirits just one night before.

The former soapie actor was making an appearance at the 012 Lifestyle Brooklyn nightclub, Pretoria. And with him was his attractive young girlfriend Rosa.

Sharing a clip of his last night out, Rosa and Jamie are seen dancing, kissing, and smoking hookah together. She captioned the Instagram post: “This was literally the last night I spent with you. So happy, so In love, and full of life, I would give anything to go back to this night again. Because if I knew it would have been our last night ever spent together I would have kept you awake, if I knew your heart would give in, I would have shared mine with you.

Rosa revealed that she was struggling to move on to the death of Jamie Bartlett.

She continued: “What hurts the most is the fact that I will never be able to hold you, talk to you, hug you or kiss you like this ever again. It feels like my heart has been ripped out of my chest and it hurts so much.

“I have so much I need to talk to you about still. I am struggling to cope without you. Nothing makes sense anymore. I am devastated and empty”.

Rosa and Jamie Bartlett began dating in 2019 after first meeting a decade ago. The star was previously married to actress Camilla Waldman.