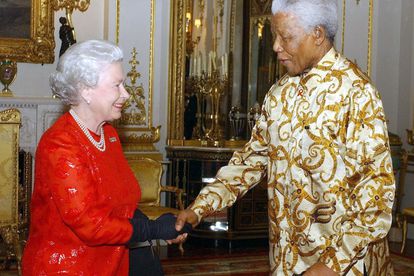 In this file photo, Queen Elizabeth II meets with former South African president Nelson Mandela during a reception at Buckingham Palace, in London, on 20 October 2003 to mark the centenary of the Rhodes Trust. Image: KIRSTY WIGGLESWORTH / POOL / AFP

In this file photo, Queen Elizabeth II meets with former South African president Nelson Mandela during a reception at Buckingham Palace, in London, on 20 October 2003 to mark the centenary of the Rhodes Trust. Image: KIRSTY WIGGLESWORTH / POOL / AFP

Queen Elizabeth II and Nelson Mandela’s friendship was elevated above royal protocol, with South Africa’s first democratic president calling her by her first name – a fact warmly remembered by his grandson Mandla Mandela this week.

The Queen who reached and touched millions of hearts around the world during her 70-year reign, passed away peacefully at Balmoral Castle, Scotland, on Thursday 8 September at the age of 96 — eliciting an international outpouring of grief and fond memories of the much-loved monarch.

But it was Madiba’s former private secretary and “honorary granddaughter”, Zelda la Grange, whose 2015 memoir, Good Morning, Mr Mandela, brought to the fore the African statesman’s close friendship and the country’s modern relationship with the Queen.

“On a visit to Britain, I was struck by the warm friendship between Madiba and the Queen. ‘Oh Elizabeth,’ he would say when he greeted her, and she would respond: ‘Hello, Nelson’.

“I think he was one of the very few people who called her by her first name and she seemed to be amused by it,” La Grange recalls in the memoir.

Per HELLO magazine, Nelson Mandela’s youngest daughter, Zindzi, revealed that her father’s down-to-earth nickname for the British monarch was “Lizzie”.

Of course, only Mandela could pull this off and as reported by the Evening Standard, this fondness was clearly reflected in how “Lizzie” signed letters to the late president: “Your sincere friend, Elizabeth R”.

The late president, who passed away on 5 December 2013 at the age of 95, even felt enough at ease to make a bold comment about the Queen’s weight, according to La Grange.

On visiting the United Kingdom after being released, Mandela and his bodyguards were given strict instructions on how to address the Queen, and what etiquette to follow. Such rules included not starting to eat a meal until the Queen begins, never commenting on politics unless invited to do so and finally, not talking to the Queen until prompted to.

After Mandela was welcomed, he spotted the Queen and walked up to her while waving…and then greeted her with the words:.

The Queen reportedly replied: “Thank you, Nelson, you don’t look bad yourself!”

ALSO READ: REVEALED: New titles in the royal family after the Queen’s death

Mandla Mandela: ‘They were both driven by a duty to serve the nation’

Madiba’s grandson Mandla Mandela appeared on GB News on Friday morning to pay tribute to Queen Elizabeth II. He also shared his memories of the close relationship between the two iconic leaders.

“Every time she would be on the telephone with my grandfather, she would always greet him with excitement and say in a humble voice ‘Hello Nelson’.

“And I would always be surprised with the response afforded by my grandfather… ‘Hello Elizabeth’.”

Addressing the similarities between his grandfather and Britain’s longest-serving monarch, Mandla said:

“They were both driven by a duty to serve the nation.

“My grandfather donated 67 years of his life serving humanity and Her Majesty was driven and bound to serve her nation and she carried it with total distinction.”

On his Mvezo Great Place Instagram account, Mandla also wrote that if his grandfather was “alive to witness her passing it would indeed have been a sad moment for him”.

From Pollsmoor to the Palace

The Queen and Mandela met on numerous occasions, starting with an invite in 1991 to Madiba to a summit in Zimbabwe of the Commonwealth group of nations.

The Commonwealth had excluded apartheid South Africa in 1961 and Mandela, who had just been freed from prison and was not yet the country’s president, did not have the rank to attend a banquet held by the Queen.

Days before the summit was held, the British monarch, as the head of the Commonwealth, had also broken with a policy of neutrality and hailed the crumbling of the apartheid regime.

South Africa was readmitted to the Commonwealth in 1994, the year Mandela was democratically elected as the country’s first black president.

Perhaps Madiba and “Lizzie” are now already enjoying a marmalade sandwich over a cuppa in the “Big Palace in the Sky”….