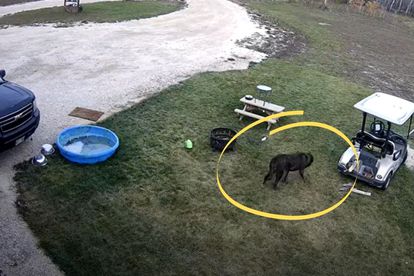 Titan had no idea that he was driving a golf cart right into his owner’s truck. Image: ViralHog/YouTube.

Titan had no idea that he was driving a golf cart right into his owner’s truck. Image: ViralHog/YouTube.

A 10-year-old dog accidentally crashed a golf cart into his owner’s truck – and walked away as if nothing happened.

In a video shared by Viral Hog – a “thriving video powerhouse” – the English mastiff named Titan can be seen sniffing around before getting into the golf cart. He then seemingly “drives” it for a spin before making contact with the truck.

The footage – that was captured on a security camera – quickly went viral in November 2021. It is stated that the video was taken in October 2021 in Manitoba – a Canadian province bordered by Ontario to the east and Saskatchewan to the west.

“I like how after the crash, he gets out and looks at the damage (with his hands on his hips,” said one YouTube user. “That dog was driving that golf cart! Haven’t laughed this much in ages so thanks for the laughs!” said another.

Others think that the dog might have tried to teach his owner a lesson, saying: “This will teach them to never run out of dog biscuits” or “this is for the times you told me we were going to the dog park but instead took me to the veterinarian.”

And what about explaining this to your insurance company?

“Just imagine explaining that over the phone with the car insurance company, they probably wanted to see the footage,” one YouTube user said. “It’s good that the webcam recorded [it] no one would [have] believe[d] it,” another agreed.