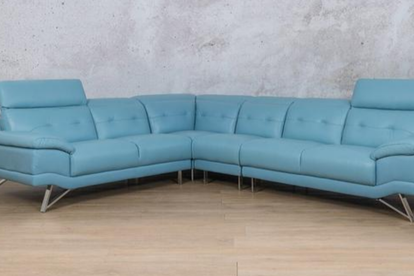 After a furniture and lifestyle brand in Springfield asked Mzansi to look out for a unique couch that was looted from their store during the unrest in KwaZulu-Natal, social media users seemingly found the now-famous blue couch.

According to TimesLive, the San Pablo Corner Sofa, a genuine leather sectional with “elegantly sloped armrests and supportive headrests”, is at an informal settlement near Quarry Road in Durban.

This comes after Sedgars Home (and seemingly Leather Gallery) which specialises in modern furniture and lifestyle items, posted the following on their Instagram account: “Hi fam, Our Springfield store was looted. We are also missing a blue couch. If you see it please tag @sedgershome. We are willing to exchange it for something that fits the house. #StaySafe #UniteSouthAfrica.”

It is not clear whether the two couches are the same or connected in some way.

Social media users to the rescue

It wasn’t long after when the couch became a viral meme in the country, after which local TikTok star, Tumi Mmope, better known on social media as ‘Tums’, proceeded to post a video about ‘finding’ the missing couch.

The couch, which is reportedly priced at almost R70 000, was later found after social media users gave the exact location, right down to its proximity to the nearest spaza shop.

Leather Gallery owner Greg Parry told TimesLive on Thursday, 23 July that he was overwhelmed with the response received from customers and the community about the whereabouts of some of the items stolen from the Leather Gallery Springfield showroom.

“We are in the process of investigating the information received from many individuals. We have taken every tipoff into consideration and are compiling the many reports we received from the public about where some of our furniture could potentially be located,” he said.

Parry said Leather Gallery was mulling its next move.

“We want to take all of the necessary precautions as we understand that the situation is still potentially dangerous and can become volatile at any moment. We would love to retrieve as much of our looted stock as possible. However, along with the safety of our customers, our employees’ safety is extremely important to us, and we would never want to put them in a potentially dangerous environment,” he said.

The SA Police Service did not respond to a query on whether it would recover SA’s famous blue couch.