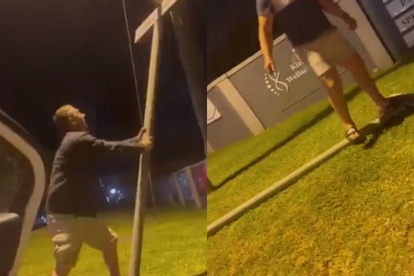 These men have been criticised for destroying the Andrew Zondo street sign in Durban. Images via Twitter: @hafvgydgegeg

These men have been criticised for destroying the Andrew Zondo street sign in Durban. Images via Twitter: @hafvgydgegeg

Over the last few days, many videos have surfaced of people destroying street lights and poles in order to take them to a scrapyard for some cash. Another one of those videos has made its way online only this time, the culprits behind the crime appear to be destroying the pole because they didn’t appreciate the street name on the sign – and not because they were trying to make some money.

The video has since gotten a lot of traction online and South Africans discuss the crime.

A short clip of two white men destroying an Andrew Zondo street pole has been shared on Twitter by a user with the handle, @andile_ice earlier today.

In the clip, the men can be seen uprooting the sign before throwing it to the ground while a woman who appears to be taking the video laughs in the background.

The video got the attention of many who wondered whether these men – like the men who destroy street poles to take them to junkyards – will be punished for their actions.

Others however pointed out that the men in the clip were only against the street being named after Zondo, an Umkhonto we Sizwe (MK) operative who was found guilty of planting a bomb in a mall leaving two adults and three children dead in 1985.

In fact, in the 80s, many opposed the street being named after Zondo who had carried out the bombings after nine anti-apartheid activists were killed by South African security forces a few days before the Sanlam Mall bombing.

According to them, it would set a bad example.

“Looks like they rejecting the new name . . They not stealing it to sell it at a scrapyard”

“Well, it is crime, malicious damage to public property…Equally, crime is a crime and a criminal is a criminal regardless of race or nationality.”

“I’m starting to believe stories about them drilling potholes at night.”

ALSO READ: WATCH: What?! Man tries to steal the top part of a streetlight