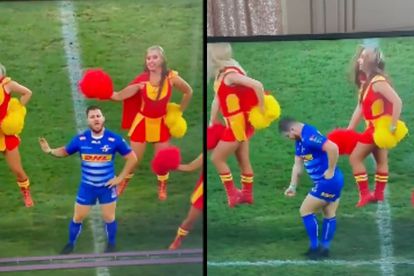 Wiaan Laing is taking the internet by storm with his sassy dance moves! Image via Twitter @tom_eng30

Wiaan Laing is taking the internet by storm with his sassy dance moves! Image via Twitter @tom_eng30

Wiaan Laing, a professional dancer from the Stellenbosch Dance Academy has caught the world’s attention with his sassy dance moves. Laing performed to Beyoncé’s 2008 hit Single Ladies from her album, I Am… Sasha Fierce, at a DHL Stormers rugby game with the rugby team’s cheerleaders.

The video of Wiaan Laing dancing with Stormers was posted on Jefferson Sacramento’s TikTok account on Saturday 23 April. Sacramento’s account is known for posting New Zealand and Australia rugby content, leaving some to believe Liang was a rugby player from abroad.

South Africans quickly rallied in the comments to share that the “rugby player” was actually wearing a DHL Stormers uniform. After the video went viral, it was discovered that he is a professional dancer from Mzansi!

Since the video was posted on TikTok, the video has accumulated over five million views and 10 000 comments.

According to Laing’s Twitter page, the performance with the DHL Stormers cheerleaders is from 2020.

THE WORLD CAN’T GET ENOUGH OF SA’S ‘RUGBY PLAYER’

Wiaan Laing’s video has been reposted to Twitter and has sparked massive reactions from tweeps.

One tweep wrote: “His rhythm. His sassy attitude. He’s in sync with back-up dancers. And more importantly, he’s having fun. I love this.”

“Beyoncé your impact is immeasurable,” wrote another tweep.

“This absolutely incredible, of course.”

Wiaan Laing is also a hip-hop dance teacher at Stellenbosch Dance Academy in the Western Cape. Laing’s YouTube videos have accumulated over 500 views each.

TAKE A LOOK AT WIAAN LAING’S ‘FOR TODRICK’ DANCE VIDEO

ALSO READ: Not all bad: Pupil puts a smile on teacher’s face with dance moves [watch]