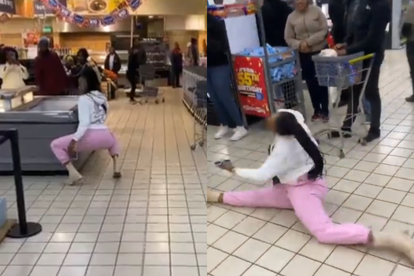 This ama2000 is having the time of her life in Pick n Pay. Image via Twitter @_mdooh

This ama2000 is having the time of her life in Pick n Pay. Image via Twitter @_mdooh

South Africa is experiencing an ama2000 takeover and it is both strange and intriguing. Over the last few years, the ama2000s (youngsters born between 2000 and 2005 or so) have made themselves more known in South Africa with their distinctive fashion and music sense. In fact, every other day, another ama2000 goes viral for one thing or the other.

The latest ama2000 to make headlines is a young lady who randomly busted a move in a busy grocery store recently.

The ama2000 are always managing to leave older generation South Africans shaking their heads and they appear to love it.

Just a month ago one ama2000 went viral after wearing jeans that were so ripped it looked more like a denim bikini.

Another one has managed to leave people with raised eyebrows after deciding to bust some serious dance moves in the middle of Pick n Pay.

In a clip shared by @_mdooh on Twitter on Sunday last week, the young lady can be seen dancing her heart out to amapiano star Young Stunna’s Adiwele.

“Nisakhala nge (they cry about) farmers market when even Shoprite is not safe,” referring to a clip of a different ama2000 dancing at a local market.

The post received thousands of views and likes from social media users who discussed the ama2000’s behaviour at length.

Others however remarked that the young lady was just having fun and didn’t really harm anyone with her bizarre behaviour and dance moves.

“It must be the high cost of living… Driving everyone nuts”

“Y’all be asking to be kicked out of retail shops, I mean honestly”