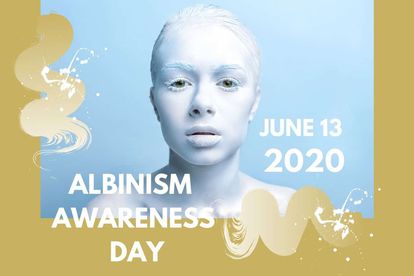 International Albinism Awareness Day is on 13 June
Image via Canva

International Albinism Awareness Day is on 13 June
Image via Canva

Even though June is packed with significant celebrations like Pride Month, Youth Day on 16 June and Father’s Day on 21 June let’s not forget that it also contained Albinism Day on June 13.

There is a quote that says: “A change in skin tone doesn’t change the individual. Get to know them for their identity and not for what they look like.”

Even though everyone belongs to the human race, they are often further classified under the different racial codes. Then there are the different religions, cultures, sexuality, gender identification, ethics and so much more, including albinism.

The importance of Albinism Day

The primary reason for this day is to make people more aware of people living with albinism (today the term albinism is preferred over albino) and their human rights.

This came after the violent attacks and murders on this community because some people believed that people with albinism have magical powers (since they are way too unique to just be humans?).

In the mid-2000s, there was a vast number of attacks and murders on albinos. They were hunted for parts of their bodies that were to be used as lucky charms and in occult rituals.

The Tanzanian Albinism Society and other non-governmental organisations then advocated for their rights. This led to the first Albino Day on 4 May 2006. The human rights council recommended 13 June to be marked as International Albinism Awareness Day which was then adopted by the United Nations from 2014 onwards.

A person with albinism has little or no melanin which means their skin is extremely pale, regardless of which racial group he or she was born into, or skin colour their parents have.

Most people with albinism may have pale skin, they often have eye conditions and are sensitive to the sun and bright light.

The skin can and should be protected by applying sunscreen to protect the skin from the sun’s ultraviolet (UV) rays and wearing protective clothing. Eye conditions can be treated by wearing sunglasses to protect the eyes from UV rays to prevent sun damage, as well as wearing prescription eyeglasses to correct vision problems.

Albinism does not deter you from being or doing anything that you desire. It is just a rare difference that was inherited genetically at birth.

It is non-contagious. It does not choose gender or nationality. And no, it cannot be changed.

Michelle Mosalakae is an actress, writer and theatre director. Perhaps her most famous role was on Mzansi Magic’s Isibaya which was quickly followed by a stint on The Queen. In 2018 she was announced as the first person with albinism to be the ambassador for the international cosmetic heavyweight Revlon (alongside Kim Jayde, Bontle Modiselle and LootLove). When this beauty isn’t lighting up our TV screens, she is serving us looks on Instagram.

Our first international model with albinism and activist was Sanele Xaba. This dashing fellow has landed big gigs such as Adidas and Kapital Clothing. And to prove that his good looks match his good heart, he founded the Rolled Sleeve Outreach Programme that collects school essentials for less fortunate children.

Refilwe Modeselle is a model, actress and media personality. While still in school, she was a back-up singer for KB. She was one of the country’s first professional models with albinism who in 2005 first appeared on a runway in a David Tlale design. She also made the Oprah Magazine 2013’s Power List and has featured in a number of magazines nationally.