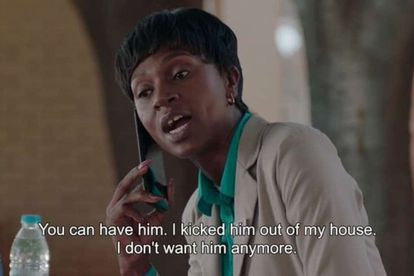 The SABC confirmed actress Shoki Mmola’s departure from Skeem Saam as Celia Magongwa on their social media accounts this afternoon (30 June) but didn’t reveal her reasons for leaving the show.

“The SABC bids farewell to Shoki Mmola who is leaving her role as ‘Celia’ on @SkeemSaam3. She will be missed by fellow cast members, crew members, and viewers watching at home. We wish her well and all the best with her future ventures.”

Entertainment blogger Musa Khawula revealed on Twitter that Mmola will not be part of season eleven of the educational soapie which begins on Monday, 4 July.

Viewers of the show still expect to see the talented actress on the soapie for the next three months as soapies/telenovelas shoot three months in advance.

Fans of the popular soapie also predict her character to be shipped off to Ga-Mashashane due to her ‘sudden’ exit.

“She deserved a better exit script though, not just disappear.”

“Noo. She must deal with Mr Kgomo first bathong.”

“No way! Aowa banna she and Magongwa make my days! They are so in tune, so natural, and so amazing to watch! Mxm actors will break your heart wa nkwa!”

“And she bows out by going to Mashashane, #Skeemsaam must respect us.”

“Just because Mr Kgomo wants to poke her ? Mxm Celia is not serious.”

ALSO READ:‘Skeem Saam’: Did Celia and Alfred get away with murdering Alfios?