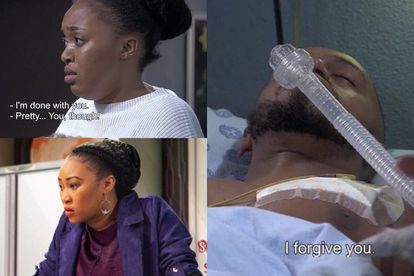 Viewers of the educational soapie Skeem Saam are demanding Khwezi pay for stabbing Lehasa and for framing Pretty for the attempted murder.

Though we know Khwezi will get arrested as the TVSA July teasers suggested, fans are worried their fan-favourite couple #PreHasa might not recover from the ordeal.

Skeem Saam’s most-hated character Khwezi (Samukele Mkhize) has been covering up for the attempted murder of her fiancé Lehasa and his mistress Pretty this week and viewers are livid.

Viewers were on the edge of their seats on Monday night when a pregnant Khwezi walked in on Lehasa and Pretty making out in his apartment and stabbed Lehasa twice.

Fans of the educational soapie are puzzled by Lehasa’s uncle who’s been quiet about her lies as he knows Lehasa decorated his apartment for Pretty (Lerato Marabe) minutes before Khwezi’s departure.

She also framed fan-favourite character Pretty when the police arrived by saying that she walked in on them and tried to end their lives.

Fans of the show are also furious with Peterson for not checking Khwezi’s fingerprints on the murder weapon she’s hiding.

“Tell me when the truth comes out. I can’t take it anymore.”

“All you need is CCTV showing the décor people leaving followed by Lehasa …the Pretty and Lehasa arriving then chilling for an hour or so before Khwezi arrives…then the transaction of 5k to Pretty from Lehasa not to mention the medical files from the abortion clinic.”

“There’s just so much who goes to attack carrying a suitcase and gets time to even change clothes whereas the attacked (Khwezi) is fully-clothed after having a “good time” with a half-naked Lehasa Skeem Saam shouldn’t play with us.”

“We have a witness Malome who will tell the court that Lehasa and Pretty had an affair and he wasn’t gonna decorate the house with flowers for Khwezi when he knew Khwezi was off to take a flight .”