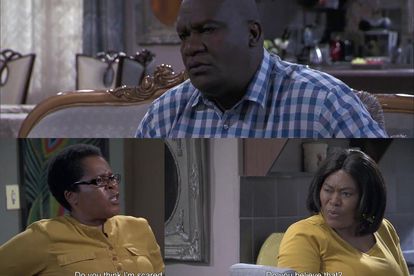 He hinted that he’s still in love with his baby mama and neighbour of many years Mantuli (Dieketseng Mnisi) and wants to marry her.

He revealed this on top of all the drama before and during his son Thabo Maputla’s wedding.

Fans first thought he’s joking but started taking him seriously when he brought it up again.

Thabo and Mapitisi (Moagi Mohlatswi) will move to their new house and do not want to set foot in his house again.

Mantuli will be flattered as she hasn’t been in a relationship since her husband left her.

This is why John confided in her first because he knows she’ll always be on his side.

THE OTHER REASON HE WANTS TO MARRY HER

John stated during the conversation with his sister that marrying Mantuli will bridge both families.

He desperately wants Kwaito’s love and acceptance and feels like marrying his mother will improve their relationship.

He doesn’t want Kwaito to feel like a mistake because his parents never dated or got married.