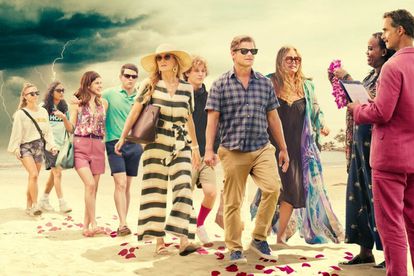 Now on Showmax, HBO’s sensational new comedy-drama The White Lotus has everyone talking. Set at an exclusive Hawaiian resort over one highly transformative week, the biting six-part series gradually peels back the glossy veneer of picture-perfect travellers, cheerful hotel employees, and the idyllic locale itself to reveal something far uglier beneath.​

Here’s everything you need to know for when The White Lotus inevitably comes up in conversation.

The White Lotus has an 88% critics rating on Rotten Tomatoes, with Time billing it as “the must-see show of the summer… a darkly hilarious, existentially terrifying wealth satire” and The Guardian as “2021’s best, and most uncomfortable, show.”

The White Lotus was equally popular with audiences, topping IMDb’s Most Popular TV list and becoming the #1 series on HBO Max in August 2021, with over seven million viewers for the series premiere.

The cast are coming for all the Emmys in 2022

“#TheWhiteLotus finale stuck the landing for one of the best TV shows of the year,” tweeted Variety’s executive editor, Ramin Setoodeh, adding, “Can’t wait for the entire cast to collect their Emmys – in 2022.”

The White Lotus was custom designed, in record time, for the pandemic

With so many shows on hold due to COVID-19 last year, HBO approached Critics Choice nominee Mike White (Enlightened) to come up with an idea for a series that could be shot in a contained, single location over the pandemic.

“Before we went, I was just depressed in my house, watching CNN, and I was like, ‘I will do anything’…I just wanted to get out of LA so bad,” Mike said in an online panel discussion at the show’s premiere at the ATX Film Festival in June.

HBO called him on the 1st of August and they were shooting at Four Seasons Maui in Hawaii by October, so Mike wrote all the scripts, cast and prepped the show in two-and-a-half months. “It was pretty intense, but we were so lucky to get this cast.”

Then again, “Nobody was working, so I guess that’s part of the reason,” he laughs.

The New Yorker hailed Jennifer Coolidge’s turn as the grieving “alcoholic lunatic” Tanya as “one of the great TV performances of recent memory, and almost certainly the greatest of Coolidge’s career.”

But Jennifer nearly passed on the role. As she told The Guardian, “I was really affected by the pandemic. It was an incredibly sad time. I was reading tragic news stories on a daily basis, had a fatalistic approach and assumed the virus was going to win. I knew people who lost their lives and was convinced we wouldn’t make it through. I wasn’t thinking about work, because I didn’t think we’d be alive. But then Mike White called…”

“I’d been gorging and self-destructing at home for months, eating pizza all day,” she continues. “There was no way I wanted to be on film unless they shot me from the neck up. I’m sort of vain, so there was no f***ing way. I can’t tell you how close I came to ruining this whole thing for myself. It’s such a great lesson in life. I’d never have forgiven myself. I would’ve sat down to watch The White Lotus and said: ‘What the hell was I thinking? I’m an insane person.’ A lot of us actors are so insecure and scared of failure, we blow our own chances.”

Creator Mike White actually lives on and off in Hawaii

Creator Mike White has lived in Hawaii on and off for the past eight years. “I came, like many mainlanders, to Hawaii and was like, ‘Oh this is paradise,’” he said at ATX. “I tried to bone up on the history of Hawaii and you realise, obviously, there’s a colonial history, but that the colonial history is still very much a part of the present cultural reality, and I just thought it would be interesting to talk about the ethics of vacationing in other people’s realities… The White Lotus is about this group of people who spend a week at this boutique hotel in Hawaii, and then there’s the people who work at the hotel, and their lives are not exactly a paradise.”

In the context of the pandemic, Mike adds that, “There was something that felt very timely about trying to vacation and get away from your problems, but you aren’t able to escape, and sometimes it’s a crucible to deal with those problems head on.”

Speaking at ATX, creator Mike White said, “I’d always wanted to do a show that got into money and how money basically can pervert even our most intimate relationships, even within marriages, within the interactions with strangers and friends and loved ones…”

So yes, The White Lotus will remind you of Succession, the HBO show that won Best Drama at both the Emmys and Golden Globes in 2020. Just like that show, The White Lotus has a lot of fun with awfully rich white people behaving awfully, but it similarly never loses sight of the humanity of the people behind the privilege.

“Dreadful rich people make for brilliant TV, but it is rare to see their privileges and prejudices skewered with such relentless precision,” says The London Evening Standard, but adds, “White’s characters can be monstrous, but they are so carefully wrought that they also feel painfully human.”

Natasha Rothwell is one of the many standouts in the cast, with Refinery29 calling her “the best thing about White Lotus,” adding, ”I already know that Connie Britton, Murray Bartlett and Jennifer Coolidge will probably get the award season love for their roles in The White Lotus but it’s Natasha Rothwell who took the series from another prestige drama about messy rich white people and turned it into a seething exposition of privilege, whiteness and what Black women have to put up with in a world that prioritizes both.”

Before The White Lotus, Natasha was best known for her Black Reel-nominated performance as Kelli in Insecure, so it’s no surprise that her Insecure co-star, Issa Rae, is one of her new show’s vocal fans, tweeting, “The White Lotus = quality white mess + @natasharothwell being brilliant. Everything I want.”

Thanks to the show’s runaway success, we’ll be getting more of what we want too, spoiled things that we are. The White Lotus was recently renewed for a second season, which will follow a new group of travellers and a new locale at a different White Lotus hotel.

While you wait for that, we’d recommend catching up on The White Lotus creator Mike White’s Emmy-nominated HBO comedy-drama Enlightened, starring Oscar winner Laura Dern as a self-destructive woman who has a spiritual awakening, creating havoc at home and work. It’s further evidence of why The Daily Beast calls Mike a “certifiable white wealth whisperer”…

Quote of the Day – Cassper Nyovest

HEATWAVE: More SCORCHING temperatures expected in these parts of SA

Poem of the day: A sadness in my soul