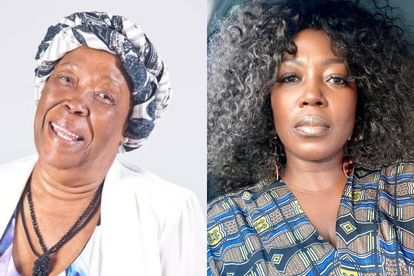 The role of Manoko is played by seasoned actress Rami Chuene.

The actress Lydia Mokgokoloshi – who plays the role of Koko Mantsha in Skeem Saam will play the role of Manoko’s mother in Giyani: Land of Blood.

Former The Queen actress Rami Chuene – joined the cast of Giyani: Land of Blood in September 2021 as Manoko.

The creative director for the show, Nthabi Tau told TVSA that Manoko is diabolical.

She married Richard – who has lost his wife Gladys and is using his connections to get ahead.

Tau also stated that Manoko masquerades as a loving wife and dabbles in rhino poaching dealing with shady characters.

She is greedy and often gets involved in illegal dealings that lead her to destroy the very community she loves.

Viewers of the SABC2 Xitsonga telenovela took to Twitter to congratulate Mokgoloshi for bagging the role.

“I think sitting at home is just too boring for her hence accepting this gig.”

“A good dancer knows when to leave the stage. Clearly she’s not the one.”

“So Giyani is no more Tsonga drama becoming Sepedi drama.”

“The respect you put when mentioning her name is appreciated.”

“She is perfect for that role hey, she and Sesi Rami are a perfect match.”