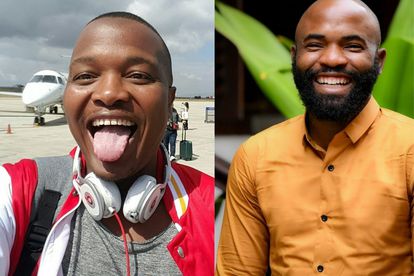 ‘Apologise to The Queen’: Phathu Makwarela is not shading Phil Mphela. Images via Twitter @PhathuMakwarela and @Mbali_Ndlela

‘Apologise to The Queen’: Phathu Makwarela is not shading Phil Mphela. Images via Twitter @PhathuMakwarela and @Mbali_Ndlela

Co-creator of The River and The Queen writer – Phathu Makwarela confused some of his followers yesterday when he tweeted about ‘The Queen, sources, and a blogger who lied’ after entertainment commentator – Phil Mphela got lambasted by Lesedi Matsunyane-Ferguson on Twitter.

Some of his followers wondered if the producer was really tweeting about the royal family or shading Phil Mphela over the Mzansi Magic telenovela.

PHATHU MAKWARELA IS NOT THROWING SHADE AT PHIL MPHELA

Producer and writer Phathu Makwarela – who’s written for The Queen confused tweeps with his tweets yesterday.

Makwarela tweeted a series of tweets that led to some of his followers thinking he’s shading entertainment commentator – Phil Mphela.

“I can say my sources got this wrong and I sincerely apologize to The Queen and the Royal Family.”

@KgaoCtrl replied: @PhathuMakwarela Guess who’s going to be kicked out of the family WhatsApp group yup you!

He replied: @PhathuMakwarela For what? I am posting what that American blogger lair wrote

“Is Queen Elizabeth aka Lisbet still dead as per the American blogger?”

THE QUEEN IS ALIVE

Makwarela who is a fan of Queen Elizabeth and often tweets about the royal family was in actual fact tweeting about the queen’s death hoax.

The queen of England – Queen Elizabeth tested positive for coronavirus and became a victim of a viral death hoax started by an American blogger.

Eonline confirmed yesterday that Queen Elizabeth II held not one but two virtual meetings with foreign ambassadors on March 1.

Hollywood Unlocked also claimed the Queen had died at the age of 95 on 22 February.

A senior royal source said she’s alive while the website’s founder and CEO stood by his reporting.

“Regarding the Queen Elizabeth story…” Jason Lee, who told Buzzfeed News he heard the news from a guest at the wedding of British Vogue editor in chief Edward Enninful, wrote on Instagram.”

“1. I’ve never lied. 2. I’ve never been wrong. 3. I trust my sources. 4. I have yet to see an official statement from the palace saying otherwise.”

“Our deepest apologies goes out to the #RoyalFamily and all involved in this embarrassing situation.”

Eswatini Air ready to take to the skies this year