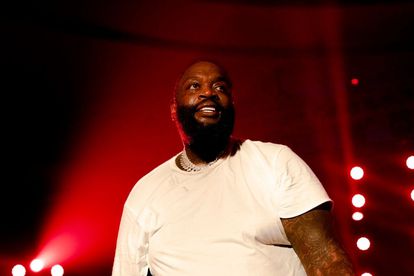 American rapper Rick Ross has a special relationship with South Africa. The hip-hop star visited Mzansi in 2015 and in 2019 to film a music video with Kwesta, but he has formed relationships with other local rappers too! Taking to Instagram on Sunday 17 April, the Diced Pineapples hitmaker sent a shoutout to some of Mzansi’s top rappers including Priddy Ugly and Da LES.

The star rapper is also looking to sign some African talent to his record label, Maybach Music Group.

According to HipHopDX, Rick Ross was in Africa over the long weekend for a performance in Ghana. While in his hotel room, the star rapper felt he needed to spread some love and positivity.

He also announced that his record label, Maybach Music Group, will be expanding to Africa with hopes to sign two African artists.

“Better believe it from parts of Africa, so let’s stay in touch, let’s build,” he said.

Rick Ross also sent a shoutout to several African hip-hop stars who are shining bright in the music industry. The likes of Ghanaian musicians Kwesi Arthur and Black Sherif got a shoutout from the rapper.

“I wanna finish shouting out my list of supporters from day one I won’t stop that for nothing,” said Rick Ross before mentioning a few of SA’s top talents.

In 2015, Rick Ross travelled to Durban for the Youth Hip Hop Festival. The 46-year-old rapper performed for thousands at the People’s Park at Moses Mabhida Stadium and shared the stage with local stars, Cassper Nyovest, Khuli Chana, Zakwe and KO.

According to TshisaLive, Ross was scheduled to perform at the Rick Ross Block Party in December 2019, but the Durban leg of the tour was cancelled due to “lack of funding”.

The hip-hop star reportedly refused to perform at the East London instalment of the tour.

JUST IN: Bulls snap up talented flanker from Pumas