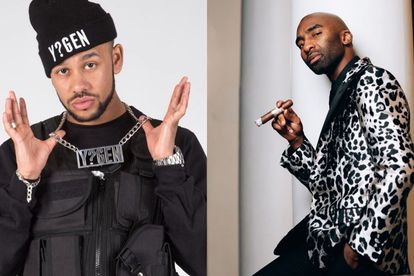 The local hip-hop community is still reeling following the untimely death of rapper Riky Rick. The Boss Zonke hitmaker passed away on Wednesday 23 February after taking his own life. Cape Town-based rapper YoungstaCPT paid tribute to Riky Rick in song.

ALSO READ: YoungstaCPT, Tyla and the hip and happening sounds of ‘Blood & Water’

YoungstaCPT and Riky Rick collaborated on Riky’s Buy It Out remix, which was released in 2017. The song formed part of Riky Rick’s Stay Shining EP. The pair also spoke deeply about YoungstaCPT’s hip-hop journey in episode 10 of Lab Live, Riky’s YouTube series.

Taking to Twitter on 19 April, the award-winning rapper wrote: “During Ramadan, I’ve had a lot of time to process my feelings and pray on it.”

“I never spoke much about Riky’s passing because we had more personal moments than musical moments so I decided my way to honour him through music.”

YoungstaCPT opens Dear Rikhado, Love Riyadh with a dialogue between him and Riky Rick.

Riky says: “In a hundred years from now we’ll all be gone. All of this, you know, it will disappear it will disintegrate, maybe it will burn down, it will freeze over.”

“This board will stop working. These mics will be useless. When that time comes, what do you want the people to remember about YoungstaCPT.”

Tweeps praised YoungstaCPT’s heartfelt Dear Rikhado, Love Riyadh. One tweep said: “A guy like Riky deserved an outro like this and it’s such a blessing you’re the one who delivered.”

“What a beautiful tribute. The rhymes man, so heartfelt.”