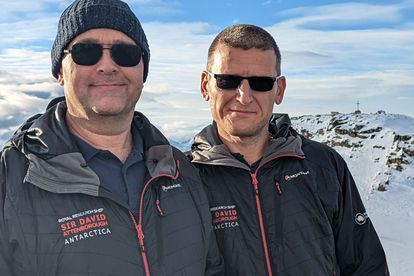 Eric Bourne and Stephan Carpenter made history as the first same-sex couple to tie the knot in Antarctica. Image via Twitter @BAS_News

Eric Bourne and Stephan Carpenter made history as the first same-sex couple to tie the knot in Antarctica. Image via Twitter @BAS_News

Two research ship crew members, Eric Bourne and Stephen Carpenter made history on Sunday 24 April as the first same-sex couple to get married in icy Antarctica. Same-sex marriage has been legal in the British Antarctic Territory since October 2016.

According to the National LGBT Rights Organisation, the Foreign & Commonwealth Office (FCO) reviewed same-sex marriage legislation in the British Antarctic Territory to ensure the legislation was in line with United Kingdom laws.

“These proposed changes relate to the Marriage and Registration Ordinances and look to bring them into line with domestic UK changes such as same-sex marriage.”

GETTING MARRIED IN ANTARCTICA

Their wedding took place on 24 April and Carpenter said Antarctica was the “perfect place” for them to tie the knot.

“We’re both very proud to be the first same-sex marriage to happen in British Antarctic Territory. [It] is such a welcoming and accepting employer and we feel very lucky to be able to live and work in such an incredible community and place together,” added Bourne.

The RRS Sir David Attenborough’s Captain Whately officiated the wedding and said it was an honour to be a part of the wedding.

“I am very proud of the inclusive culture within the British Antarctic Survey and across the Polar Regions. I am thrilled for them both and wish them all the very best.”

Bourne and Carpenter’s wedding reception will take place on Sunday 8 May with all the staff at the Rothera Research Station. The happy couple will celebrate with their family in friends in Spain later this year.