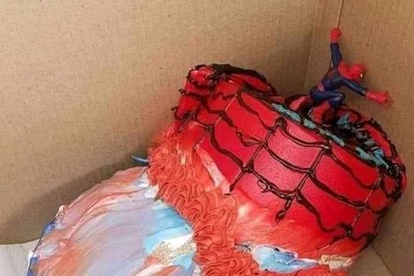 South Africans seem to love Spider-Man and never waste an opportunity to either dress up like him or share content about the “friendly neighbourhood Spiderman”. Another post has popped up about the beloved movie character and it is actually quite heartwarming.

Spiderman to the rescue!

Mzansi seems to have a special place in their hearts for the TV character Spiderman. Over the last few months, we have witnessed how many locals dressed up in Spidey outfits to either entertain kiddies (and grownups alike) at parties and events.

And now what may be the cutest post of them all has been spotted on Twitter. Taking to the app on 24 August, a Twitter user with the handle @kim_tendayi shared a snap of a tiny Spiderman figurine helping to keep up the top tier of a cake that unfortunately slid off the bottom tier of the kiddies Spider-Man themed cake.

South Africans love to see it

The post was well-received by the country’s ample Spider-Man fans and got over three hundred likes. Many of them also headed to the comment section where they shared sweet thoughts on the little hero:

“He once saved a train full of people…why not a cake?”

The trailer for Spider-Man: No Way Home has been released and the internet is obviously going wild. The movie which is set for release on 17 December this year, has been described as amazing by Rotten Tomatoes.

In this exciting latest Spider-Man instalment, Tom Holland who plays Peter Parker and Zendaya who plays MJ find themselves having to escape the looming threat brought by the villain in this segment, J Jonah Jameson who is played by JK Simmons.

MJ and Peter are back at school but with a lot less to worry about since she knows the truth about his other life.