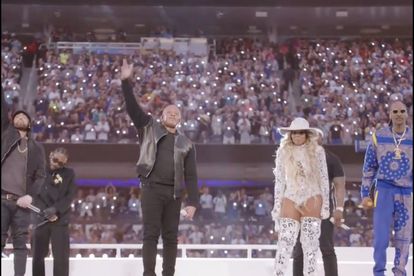 The Super Bowl and halftime show broadcasted live in South Africa in the early hours of this morning (14 February) at 01:00 on ESPN (DStv 218) and ESPN2 (DStv 219) but here’s where you can catch the repeats.

WHERE TO WATCH THE SUPER BOWL IN SOUTH AFRICA

The American National Football League will see the Cincinnati Bengals take on the Los Angeles Rams at the Super Bowl this year. The Super Bowl is held at SoFi Stadium in Inglewood, California.

Last year The Weekend trended on Twitter following his brilliant halftime show performance. This year there was an all-star lineup for the halftime show this year including – Dr Dre, Snoop Dogg, Eminem, Mary J Blige and Kendrick Lamar.

The halftime show opened with Dr Dre and Snoop Dogg’s The Next Episode followed by more of Dr Dre’s classics. Mary J Blige, Eminem and Kendrick Lamar also threw in some of their hits and there was a surprise 50 Cent throwback.

Some of the Mary J Blige hits to look out for were Family Affair and No More Drama.

Watch the trailer for the halftime show below.