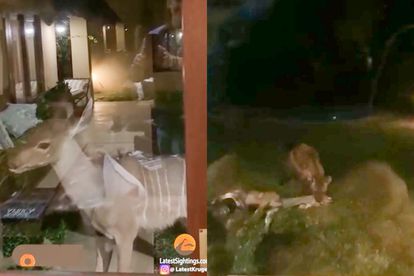 A group of American tourists staying at a private reserve in the Kruger National Park had a front-row seat to predation when a hyena attacked a baby kudu right on their doorstep. Weston Behlen, 22, told Latest Sightings that the incident happened two days ago on Wednesday, 26 May.

THERE’S A KUDU… AND HYENA ON MY STOEP

Behlen said he and his friends were relaxing in their accommodation when they heard something slam into the door from the outside. “We then realised it was a kudu that was foaming at the mouth from being nervous,” said Behlen to Latest Sightings.

In the the video, the Kudu’s cut-off tail is very noticeable. The onlookers comment that the animal looks panicked and are concerned that it might jump through the window of their accommodation.

Around the 30-second mark, the cameraman says “what if a jungle cat just jumps on him right now.” Coincidentally, that is exactly when the hyena leaps at its prey. The frightened cameraman spins around after being startled by the attack but manages to refocus on the animals.

The Kudu struggles for a few seconds but it is no match for the hyena, which delivers the fatal bites to the kudu’s neck right in front of the building’s windows. The predator then drags the Kudu away and the video comes to an end.

Behlen said that after the clip ends, the hyena began disembowelling the Kudu and summoned other hyenas to join in on the meal. The corpse was eventually dragged away from the accommodation by the animals.

The tourist said he and his mates were shocked by the incident because they didn’t know if the animals would crash through the glass or how events would play out.

“Being from Omaha, we don’t get to see many things like this at all, so it took us completely by surprise. It ended up being a pretty exhilarating and adrenaline-raising moment,” said Behlen.