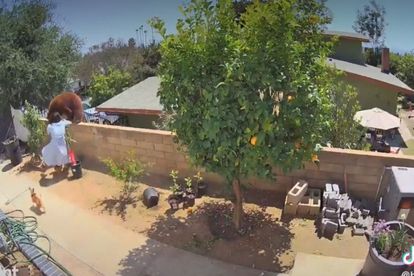 A TikTok video of an American teenager saving her dogs from the clutches of a bear in her garden has taken the internet by storm. In the viral clip, which was posted to the shortform video platform on Memorial Day in the United States (Monday, 31 May) the woman identified as Hailey, 17, heroically pushes an adult bear from a low wall.

According to fact-checkers, Snopes, the footage was taken in California. The video was viewed nearly 10 million times and received 30 000 shares within the first six hours of being posted.

The star’s cousin Brenda, TikTok user@bakedlikepie, who opted to use the Oh No sound to add some comedy to the dramatic footage, uploaded the video to social media.

Reply to @cynthianatsalazar @tempurashrimp guess you a fighter and a flighter haha. Love you, you badass! #badass #cousinhailey

“My cousin Hailey yeeted a bear off her fence today and saved her dogs. How was your Memorial Day?” read the caption of the post.

The video, which was originally captured by CCTV security cameras, Hailey runs out and pushes a brown bear – who’s accompanied by her cubs – from a low wall. At least four dogs can be seen barking at the bear who takes a few swipes at the canines.

After pushing the bear, Hailey picks up one dog and guides the others away from danger. Brenda said that the dogs and Hailey are fine in a comment, adding that one of the dogs was “a little scratched” but it was not a serious injury.

Brenda uploaded a video of the incident without music at a later stage, which showed just how loud the encounter was:

Reply to @cynthianatsalazar @tempurashrimp guess you a fighter and a flighter haha. Love you, you badass! #badass #cousinhailey

According to Snopes, the bears stayed in the area for a while after being shooed away but they left eventually.

Hailey later uploaded a video of her own about the incident, according to Newsweek, and explained that encounters with bears are actually more common than people realise in mountainous areas.

“I was in the mountains so that is actually really normal and it’s summer so they always come now,” said Hailey.

“This is our garden area and the dogs start barking and I just thought they were barking at dogs, because they always bark at dogs and squirrels or whatever.

“I go to tell them to stop and when I go over there to see what they’re barking at, I’m like ‘that’s a funny-looking dog.’ By the time I get there, the bear is literally picking up one of my dogs.”

Hailey said she doesn’t think she pushed the bear that hard but it was enough to make the animal lose balance. The only injuries she reported were a sprained finger and scraped knee.