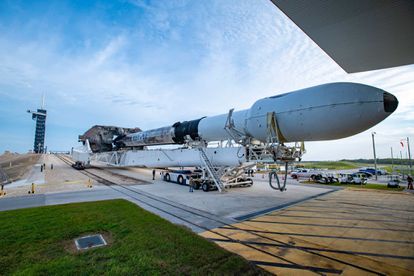 SpaceX on Thursday, 27 December 2020, will be launching the NROL-108 (National Reconnaissance Office Launch) – a spy satellite – into low-Earth orbit from Launch Complex 39A at Kennedy Space Center, Florida.

Residents in the area were warned of sonic booms when the touches down at Landing Zone 1. Watch the video of the launch and landing here.

The launch was initially scheduled for 9:00 Eastern Standard Time (EST), or 16:00 South African Time (SAST). However, at T-30, the crew confirmed that the launch would be delayed by 45 minutes.

Following that, an Falcon 9 auto-abort was initiated at T-1:53, “due to a second stage sensor reading”. Today’s launch window closes at 12:00 EST (19:00 in South Africa), so it might still be scrapped.

If the launch doesn’t go according to plan, SpaceX confirmed that the backup opportunity will be available on Friday, 18 December 2020 with a three-hour launch window opening at 9:00 EST, or 16:00 SAST.

The Falcon 9’s first stage booster previously supported the launch of SpaceX’s 19th and 20th cargo resupply missions to the International Space Station, as well as a Starlink mission and the SAOCOM 1B mission.

SpaceX officials warned in an advisory that residents are “like to hear one or more sonic boom”, but explained that “what residents here will depend on weather conditions and other factors”.

“There is the possibility that local residents may hear one or more sonic booms during the landing attempt”.

If all goes according to plan, the Max Q (the moment of peak mechanical stress on the rocket) will take place one minute and 12 seconds after launch, followed by the 1st stage main engine cutoff at 2:18 minutes.

The 1st and 2nd stage separation should follow three seconds later. The 2nd stage engine will start up two minutes and 30 seconds after launch, followed by the boostback burn, fairing deployment, and the 1st stage landing.

Now read – Star of Bethlehem: Set your reminder to see the Christmas Star on 21 December