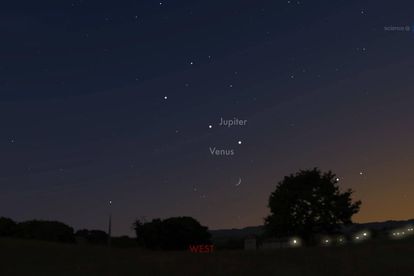 Jupiter and Saturn will pass by each other 21 December 2020. Image credit: NASA

Jupiter and Saturn will pass by each other 21 December 2020. Image credit: NASA

A celestial wonder will be taking place at the end of a rough year: We will be able to witness a celestial event known as the “Star of Bethlehem”, of the Christmas Star, when Jupiter and Saturn move close together.

It was confirmed by Dr Daniel Cunnama, a science engagement astronomer at the SA Astronomical Observatory (SAAO) who explained that the spectacular sight is thanks to a conjunction of Jupiter and Saturn.

The Bethlehem Star: What you need to know

The SAAO passed the following information along to The Good Things Guy:

“The conjunction is a really big event as I’m sure you know. Jupiter and Saturn will come as close as 0.1 degrees (a fifth of the moon’s angular size!) Great conjunctions are rare, occurring only every 20 years, and this one is particularly special because it’s so close”.

The SAAO goes on to explain that there are only six great conjunctions between 1600 to 2599 where the minimum separation between Jupiter and Saturn was less than 0.2 degrees.

As per Nasa’s statement Jupiter and Saturn, “have been travelling across the sky together all year”. The two giant planets will appear just a tenth of a degree apart, approximately thickness of a dime held at arm’s length.

This means the moons orbiting both planets will be visible in the same field of view as well. Saturn will appear as close to Jupiter as some of Jupiter’s moons. Virginia Tech astronomer Nahum Arav adds:

“This rare event is special because of how bright the planets will be and how close they get to each other in the sky”.

How to see the Christmas Star

It’s really easy. You’ll need to look West just after sunset. Starting October 2020, the two planets began “moving towards” each other and will line up perfectly for a spectacular display just before Christmas.

You won’t need any special equipment, either. According to the SAAO, both planets are already visible to the naked eye. That said, using a pair of binoculars or a telescope wouldn’t hurt either.

If you’re still struggling, just allow the moon to guide you. If you look West on 21 December, approximately an hour after sunset, the two planets will be close to the moon, as indicated in the image below.

The gaseous Jupiter will be shining the brightest. Lined up, both planets would appear as one large, bright star, even if you’re in an area with light pollution. However, the darker the night, the brighter the “star”.