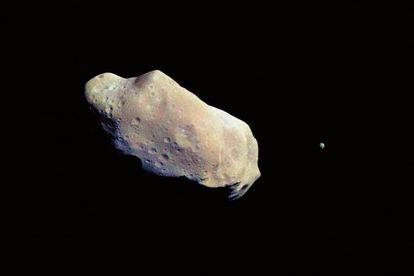 An asteroid named Apophis, after the ancient Egyptian god of chaos, is reportedly picking up speed as it is heading towards Earth.The space rock is set to visit us in March.

Asteroid Apophis, also known as 99942 Apophis, was first discovered the asteroid in 2004 by researchers from the University of Hawaii Institute for Astronomy.

They have been tracking it since then and predicted it will pass by Earth in 2068. It was initially believed the asteroid posed no threat to Earth. But that’s about to change.

Asteroid Apophis: What you need to know

Experts and researchers with a sly sense of humour are asking why Apophis didn’t show up in 2020. The year has been a trainwreck so far and an asteroid impact would have made for a nice season finale.

Rest assured, even though the asteroid is picking up pace, it won’t reach our neck of woods for a few more years. That means you still have time to get your affairs in order.

Previous research conducted by the University of Hawaii Institute for Astronomy indicates that Apophis won’t impact Earth, it would just wave hello as it flies past our little blue planet.

New research confirmed that Apophis is picking up speed and “might cause chaos” when it eventually reaches us. In other words, Apophis won’t wave as it passes, it might stop for tea.

And by stopping for tea, we mean there’s a high probability that Apophis will impact Earth in 2068. The action of picking up speed as it nears us, is known as the “Yarkovsky effect”.

According to Dave Tholen, a team member at the University of Hawaii, that means that some parts of the asteroid are heating up faster than others. Tholen explains:

“The new observations […] were good enough to reveal the Yarkovsky acceleration of Apophis, and they show that the asteroid is drifting away from a purely gravitational orbit by about 170 metres per year, which is enough to keep the 2068 impact scenario in play”.

He added that the “warmer hemisphere [of the asteroid] would be pushing slightly more than the cooler hemisphere, and that causes the asteroid to drift away from what a purely gravitational orbit”.

Prevention is better than cure

As it turns down, Apophis will be visiting us before 2029 as well. Scientists are optimistic about the earlier flyby, saying it’s an opportunity for astronomers to find out more information about Apophis.

That said, it’s still probable that during the 2029 close encounter, Apophis would pass through a gravitational keyhole. That would set up a future impact exactly seven years later, on Friday, 13 April 2036.

According to researcher Mete Sohtaoğlu, Apophis could on impact “release the same equivalent as if 880 million tons of TNT exploded”.

Scientists’ findings, nine years from now, could provide us with the data we need to prepare for a possible future impact, not just from Apophis but the myriad of other asteroids out there as well. Happy Mag summed it succinctly:

“Apophis, the god of chaos, could ironically be the key to preventing chaos from these potentially hazardous asteroids. Take that, Egyptian mythology”.

Asteroids which could potentially impact Earth

One of the entries earliest visitors on NASA’s “Sentry: Earth Impact Monitoring” list – Asteroid 2009 JF1 – was discovered more than a decade ago. It measures only 12 metres in diameter and will fly by or hit Earth in 2022.

Another tiny asteroid, known as 2018 VP1, is expected to arrive at some point between 2020 and 2025. The largest asteroid on the list isn’t actually expected to come into contact with Earth until the year 2880.

That mister of a space rock is called 29075 (1950 DA), and it is almost three times as big as the Empire State Building; roughly 1.3 kilometres in diameter. It could cause significant damage if it impacts Earth.