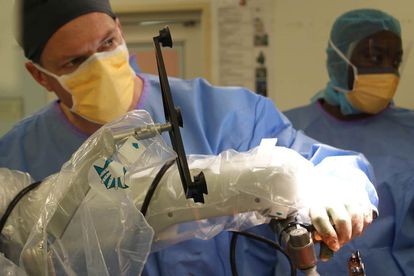 The African continent has something to be proud of, the first full knee replacement operation was successfully completed in Johannesburg using the state-of-the-art Mako robotic-arm assisted surgery system.

Netcare revealed that the surgery was performed at its Linksfield Hospital. Orthopaedic surgeon, Doctor Chris McCready was the one who performed the operation.

According to the doctor, the system for total knee replacement was already well-established in Europe, the United States, and the United Kingdom. In 2018, the system was used internationally for over 250 000 procedures.

It’s also versatile enough to accommodate use for hip and partial-knee replacements.

Advantages of the robotic-arm assisted system

The robotic-assisted surgical system’s main advantage was that it drew data from a computed tomography (CT) scan of the patient’s knee prior to surgery. This information is then “used to develop a three-dimensional pre-operative plan unique to each individual.”

“This technology determines the dimensions for the surgical cuts to the bone surfaces, so that the best sized implanted joint components can be selected for each patient, and the placement and alignment of the implanted components can be planned in advance.”

How the system works

The surgeon further explained how the system worked stating:

“During the operation, the robotic-arm system provides detailed visual, auditory and tactile feedback to the surgeon, which helps to enhance surgical precision in positioning and aligning the knee implants.”

The surgeon is responsible for controlling the robotic-arm system at all times. Allowing the doctor to control the arm means there’s an additional safeguard for the patient.

The doctor can make sure “that only the specific areas identified in the personalised pre-surgical plan can be operated on.” Usage by a surgeon prevents the possibility of damage to critical structures within the knee.

McCready shared the benefits of the robotic-arm system saying:

“Benefits for patients that have been noted in outcomes recorded internationally for this advanced surgical option include the achievement of a better balanced and more natural-feeling implanted knee, less post-operative pain and quicker recovery time.”

The system could be a gamechanger in Africa

The managing director of Netcare’s hospital division, Jacques du Plessis, noted how the development had great potential. He said it could significantly enhance patient outcomes during surgery.

“In appropriate cases, [it] provides greater choice in terms of the surgical options available for individuals requiring total knee replacements.”