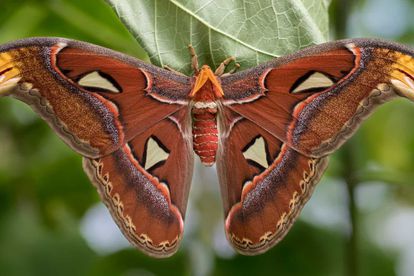 Moths to cover the earth? Image via Adobe Stock

Moths to cover the earth? Image via Adobe Stock

According to investigators from the University of Washington, the solution is staring us right in the face. Why not use flying insects such as moths, to place sensors in locations that would ordinarily be difficult to reach from Earth?

The idea is to use insects as a flying platform for carrying tiny, lightweight sensors, weighing less than one hundredth of an ounce. This insect-borne sensor can be strapped in place using a small magnetic pin and surrounded by a thin coil of wire.

The researchers remotely trigger the coil to create a magnetic field by generating a current that runs through it when the insect is in the right location This causes the magnetic pin to pop out of place, and the sensor to safely plunge from a height of up to 22 metres without breaking.

DROPPING THINGS FROM THE AIR

Vikram Iyer, a doctoral student in electrical and computer engineering at the University of Washington said, “Dropping things from the air is a great way to get things into hard to reach places. This is a strategy people use in disaster scenarios to deliver food and medical supplies, and is usually done with large planes or helicopters. That got us thinking. Can we use this same idea with much smaller drones, or even live insects, to release sensors across a large area on Earth?”

The sensors on the ground can be used to record information such as temperature or humidity and, in the future maybe more.

INSECTS PAVE THE WAY FOR POTENTIAL MILITARY APPLICATIONS ON EARTH

The Defense Advanced Research Projects Agency (DARPA) has flown rhinoceros beetles around like miniature RC helicopters. Other research labs have expanded on the notion of remote controlling insects to create cyborg beetles. They control the signals transmitted to them so that the creatures speed up, slow down and take longer or shorter strides.

It is hard not to think that spy sensors dropping armies of moths from Earth could have potential military applications. It is difficult to imagine a stealthier delivery platform for deploying surveillance sensors than a few harmless moths quietly fluttering through the sky.

The brilliance of the idea is that it could be customised according to requirements.

The researchers on the project believe that using their unusual technique, it would be possible to effectively carpet bomb large areas with tiny sensors for monitoring data such as the conditions in a large area of forest.

The sensing devices can transmit data at ranges of up to one kilometre and consume so little power that it has the potential to run for years on a single battery.

Maruchi Kim, another doctoral student who worked on the project said, “Environmental research like maybe detecting the spread of forest fires or monitoring emissions over a large area are potential applications. Smart farms could also benefit from being able to quickly deploy things over a large area, as well as in spaces like industrial plants where you might have hard to reach places where you need to put a sensor.

“Another potential area is studying small animals or invasive species, you could attach this to something like a small bird or insect and use the on board temperature sensor to release it when it gets to a nest, likely indicated by a temperature spike.”

Kim said the researchers are currently working with the Washington State Department of Agriculture to help track the invasive Asian giant hornet.

“At the moment, we’re just using the wireless sensor part with the goal of following a live hornet back to a colony. But in the future, we could add the release mechanism and drop the device once it reaches a nest,” Kim said.