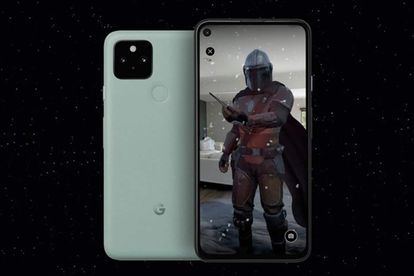 Google teamed up with Disney to bring us the AR (augmented reality) experience we’ve all been waiting for: The Mandalorian. And yes, The Child aka Baby Yoda makes an appearance too.

Google announced that The Mandalorian AR Experience “puts you in the shoes of a bounty hunter following the trail of Mando himself, Din Djarin and the Child”.

“In a galaxy far, far away, the Mandalorian and the Child continue their journey, facing enemies and rallying allies in the tumultuous era after the collapse of the Galactic Empire.”

The teams “collaborated to build hyper-detailed models and life-like animations—all while packing scenes with fun surprises”. Matthieu Lorrain, the Head of Creative for AR Partnerships, explains:

“Using ARCore, Google’s developer platform for building augmented reality experiences, we created scenes that interact with your environment and respond to your surroundings”.

Lorrain adds that you can discover and unlock even more effects based on your actions. In addition, the team also enabled occlusion, which allows “3D scenes to blend more naturally with our world”.

From a more practical point of view, Google also uses augmented reality elements in Google Maps on Android and iOS devices to keep you on the right track when out for a walk.

So, when you’re trying to find a Gatsby in Cape Town, you can simply open up your Google Maps app, type in your destination and point your camera until you see a direction arrow overlayed on the real world via your phone.

Google is also using it’s latest AR tech to view anything from animals to complex 3D models in your living room. This makes it easier for students to study the systems within our bodies, and even microscopic cells.

That said, you won’t need an active 5G connection to take part in the fun. Google said it would roll out the service to more devices in due course.

“New content will keep rolling out in the app each week on Mando Mondays, so stay tuned — and Pixel owners should keep an eye out for additional exclusive content outside of the app as well”.