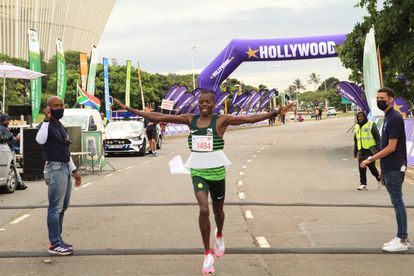 Zimbabwean runner Isaac Mpofu on Sunday forfeited R50 000 in prize money during the Durban International Marathon for having ONE licence number.

Mpofu had one licence number which was placed in front his vest and nothing on the back of his shirt at the finish line.

WHY MPOFU WAS DISQUALIFIED BY ASA DESPITE WINNING DURBAN INTERNATIONAL MARATHON

Now, according to Athletics South Africa (ASA), Mpofu had to be disqualified and forfeit the R50 000 prize money, as per the rules.

ASA said the rules are clear that the participants of the Durban International Marathon had to have two license numbers on the day.

And for that reason, Mpofu has no leg to stand as he contravened the rules – the Zimbabwean runner was left distraught after learning the news.

South African runner Tumelo Motlagale was declared the winner after he came in second behind Mpofu having clocked 2:11:15.