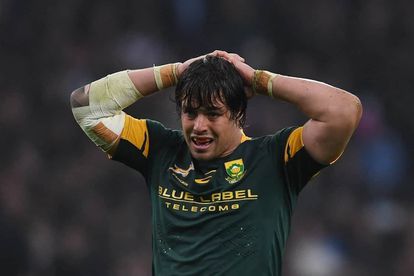 1. And you’d rather beating the Springboks wasn’t regarded as important?

Jonny May just won the World Cup Final judging by his celebration.

2. Listen to the batsman, Bokke.

We full of smiles for penalties and drop goals then eng score a try and extras ????tries bokke tries!! #SAvsENG

The last South African to fall so hard in London was when Frank Bruno decked Gerrie Coetzee. Eben’s head will be hurting #ENGvRSA

4. That’s it. Blame the French. That’ll solve everything.

Joke time: There’s this French ref, and a scrum… That’s it, that’s the joke. #ENGvRSA

Boks very limited here, like a decent southern suburbs school in Cape Town that thinks it can go to Paarl and win…

6. You’ll get nowhere with that attitude, son.

Let’s hope the game plan was to see out the first half and work England out and then attac…. Oh who am I kidding? We’re so fucked.

8. Yes you, Monsieur Garces. Get stuck in, man!

Boks hoping the ref will make tackles for them?

9. So that’s kind of a win in itself then. Right everyone?

At least we know now that no half-arsed Kumbaya indaba is going to save the Boks.

10. No long service award and a retirement gift?

The Springboks are being captained by a man who wants out. That’s as leaderless as you’re gonna get.

Bok rugby is obsessed with nostalgia. Keep playing Willie. Play Strauss who wants out. Play Stormers who were good two years ago

The good news is we spun the ball all the way out to the wing. The bad news is the wing was Adriaan Strauss.

13. All hail the over-reaction klaxon!

Springboks must have the worst defense in the world right now

time to go Allister. we can only hope for loss against Wales and maybe italy so it is dramatic enough to require a change