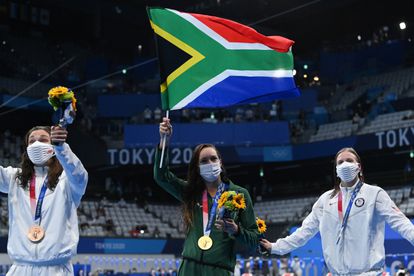 A social media crowdfunding campaign that was started after initial reports claimed that SASCOC would not be paying bonuses to athletes who won medals at the Tokyo 2020 Olympics raised more than R100 000 within its first hour.  South Africa only had two medal-winning athletes at the Games – Tatjana Schoenmaker, who won gold and silver in the Tokyo pool and even managed to set a new world record, and Bianca Buitendag who finished second in women’s surfing.

“In 2016 Wayde [van Niekerk] earned R500k for winning gold and an extra R150k for breaking a [World Record],” said Sharman in a tweet before setting up the fund.

“Chad earned R200k for a silver. By this standard [Schoenmaker] should be rewarded with at least R850k and [Buitendag] R200k. [Fikile Mbalula] tell Nathi Mthethwa to get that chequebook out,” said Sharman.

Following the reaction to the initial report that Schoenmaker and Buitendag would receive no bonus for their performance, Mthetwa’s ministry put out a statement on “recognition and reward of excellence for exceptional performance at the 2020 Olympic and Paralympic Games.”

The South African reported that the crux of the statement was that “SASCOC are waiting to see how many medal winners the country has at the Paralympics before committing to any payments.” It seems unlikely that any bonuses will be paid to Schoenmaker, Buitendag or any successful Paralympians before September by the government.

The crowdfund started by Sharman, however, will run for the whole of August and will be paid to the pair of athletes no matter what the Ministry of Sport decides to give them.