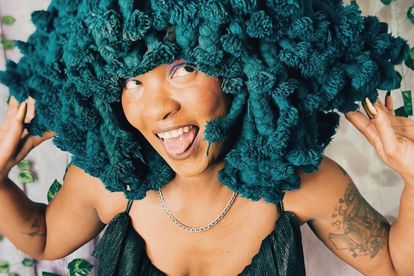 South African musician Moonchild Sanelly is one of a plethora of artists featured on the FIFA 22 soundtrack.

Moonchild Sanelly, whose real name is Seneziswe Sanelly finds herself in illustrious company on the FIFA 22 soundtrack.

Moonchild Sanelly to feature on FIFA 22

The popular football game is set for its much anticipated release on the first of next month (October) and those who are going to be in possession of a copy of FIFA 22, will in turn be in line to hear the voice of popular artist Moonchild Sanelly, who, with her vocals will be flying the South African flag high.

Born in Gqeberha, Moonchild Sanelly rose to prominence as she featured on the popular 2017 hit song midnight starring alongside mega producer and artist Dj Maphorisa as well as the very popular and fellow Eastern Cape-born artist Busisiwa. She has come along way from that song, building her own brand since and featuring on the FIFA 22 official soundtrack is proof of her international recognition.

She was quick to insist that, getting onto the FIFA 22 soundtrack, was not an overnight feat, however, and Moonchild Sanelly revealed that it was rather, something that had been in the works for a while now.

She reacts to the feat

“I am so excited. We had been working on this (FIFA 22 soundtrack feature) for months and a few weeks ago I was in PE for my sister’s funeral and I got the news. At the time I did not get as excited as I did when the announcement was made yesterday. I am very happy,” said Moonchild Sanelly speaking to Drum

Moonchild Sanelly also admitted that, she had little knowledge that she would be featured on the FIFA 22 soundtrack but was over the “moon” upon receiving the official confirmation

Admits she was in the dark

“I do not know the exact details of who approached who, but I am very excited that it is happening. I do not always celebrate my victories and it was not until someone very close to me pointed out how big of a deal this is. I keep pinching myself. I recently had a conversation with someone about how we do not always celebrate our victories because we want to be seen as humble, but I am teaching myself to celebrate myself because I work really hard,” concluded Moonchild Sanelly