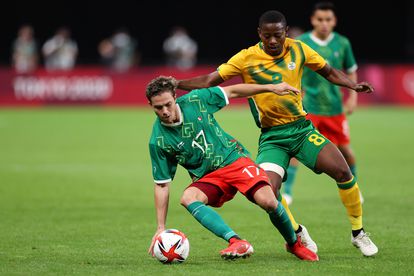 SAPPORO, JAPAN – JULY 28: Sebastian Cordova #17 of Team Mexico is challenged by Thabo Cele #8 of Team South Africa during the Men’s First Round Group A match between South Africa and Mexico on day five of the Tokyo 2020 Olympic Games at Sapporo Dome on July 28, 2021 in Sapporo, Hokkaido, Japan. (Photo by Masashi Hara/Getty Images)

SAPPORO, JAPAN – JULY 28: Sebastian Cordova #17 of Team Mexico is challenged by Thabo Cele #8 of Team South Africa during the Men’s First Round Group A match between South Africa and Mexico on day five of the Tokyo 2020 Olympic Games at Sapporo Dome on July 28, 2021 in Sapporo, Hokkaido, Japan. (Photo by Masashi Hara/Getty Images)

A major update has been issued in Poland with regards to Thabo Cele who has been on trial at Radom Radomiak.

Cele has been hard at work in Poland, where he was invited to train with topflight side Radomiak after his impressive performances for South Africa’s u23 side at the Olympics.

The player had reportedly attracted a lot of interest from clubs both locally and abroad, with sources close to Cele confirming that the player’s preference was to try and stay in Europe before considering any possible deals back home where the likes of Kaizer Chiefs and Amazulu have been rumoured to be circling around the 24-year old.

Reports earlier this week had looked positive that Cele, had indeed found a new home when pictures of the tidy midfielder training with his potentially new teammates at Radomiak. His presences at that club’s training ground had already been confirmed by the local media, who on Sunday claimed the player would start training with the side on Monday and Tuesday.

Cele made a quick impression on the coach

It did not take long for Cele to make an impression on the coaching staff at Radomiak, with the club’s coach giving a glowing account of the player after watching him closely.

“I liked this player (Cele) . I watched him more closely during small and big games, I followed his career. A couple of weeks ago, he was playing at the Tokyo Olympics, full games, I watched them. He is a valuable player, I do not want to prejudge, but it is quite possible that a quick decision will be made and he will join us. We just wanted to see what it looks like against the background of our players and it is very positive”-  said Dariusz Banasik the coach of Radomiak

However, according to weszlow.com the situation has taken a massive twist and it now no longer looks like Cele will join Radomiak with a few complications with regards to negotiations having arisen at the last minute.

Agent proving a stumbling block between player and club

The publication claims that the stumbling blocks only began to arise once the two parties sat down to discuss the financial side of the deal. Radomiak were always of the opinion that, because of Cele’s relative inexperience at the top level, they would be getting him in as a cheaper option. However, the player’s representatives are said to have ended possibilities of him joining due to their exorbitant fee requests.

The journalist covering the story then took to his official Twitter platform to further elaborate on the situation regarding Cele, claiming that the issue was not the players finances but rather that of the bonuses his agent had been asking for.

“When the South African youth national team representative came to Radom , it was said that he would be a relatively cheap footballer. He trained in good academies, but spent his entire career in the second Portuguese league, so even playing at the Tokyo Olympics was not a huge bargaining chip. Indeed, when it comes to salary, the requirements of Thabo Cele and his manager were not much of a problem. Worse, that as a free player, the footballer – or his agent – wanted to delete a large commission for the transfer and the amount for the signature. Radomiak, despite his positive opinion, gave up further talks and if there is no sudden turn of action, we will not see Objectives in a green T-shirt.” Read the passage on the article

Will Cele’s agent end up lowering his demands, or will they end up costing the player an opportunity of topflight football at Radomiak?