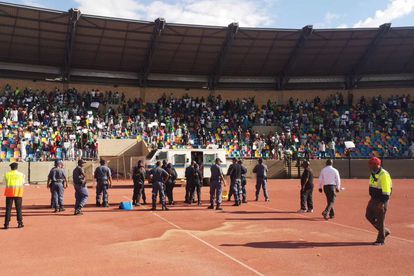 South African police fired rubber bullets and stun grenades Sunday to disperse a crowd who invaded the pitch and forced the abandonment of a PSL match between Bloemfontein Celtic and Cape Town City FC.

Authorities said there were no reports of casualties after the fixture was ended 23 minutes into the first half with no goals scored.

The reason for the pitch invasion was not immediately known in a match pitting fifth-place Cape Town against 10th-place Celtic.

An eye witness told AFP that when the pitch was invaded, the players, coaches and technical staff hurried to the safety of the changing rooms.

Local media reported that Celtic fans were staging a protest against club owner and Chairman, Max Tshabalala. Reports suggest that fans want to meet with Tshabalala, but their requests have been ignored. Fans say they have tried peaceful boycotts, to no avail.

At the top of the list of concerns is the financial future of the club. Earlier in the season, wage issues disrupted training while other reports claim the club could be put up for sale and, possibly, be relocated to the Eastern Cape. The club, however, has denied these rumours.

The PSL said in an official statement that it “condended the act of hooliganism” that forced the fixture to be abandoned. The league is waitinf for reports from the match commissioner and security.