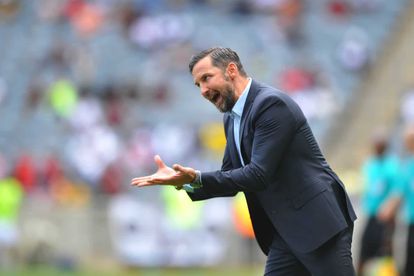 Josef Zinnbauer coach of Orlando Pirates urges his side on. Pic Sydney Mahlangu/BackpagePix

Josef Zinnbauer coach of Orlando Pirates urges his side on. Pic Sydney Mahlangu/BackpagePix

Orlando Pirates will have a bit of a rest before their next fixture, which is away to Mamelodi Sundowns.

The Buccaneers dropped points in Durban against Golden Arrows on Saturday, with the two sides playing out to a goalless draw.

Victory would have seen them inch closer to the table-topping Kaizer Chiefs, who lost to AmaZulu just hours after the clash in Clermont.

Speaking after the game, the German mentor was satisfied with his team’s performance, despite failing to claim all points on offer.

“Ja, it was a tough game, we know this before. You see the field, the opponent is very aggressive in the defending, we know this. The performance from my team was not bad, we want three points,” Zinnbauer told SuperSport after the game. “I think we had in the first half the chance to score but second half, with a lot of wind, it’s not so easy for the players. It’s [an] away game, we have one point, we wanted three, but it’s okay. “I’m not happy about the result but we take one point to prepare now for the next game.”

Tough assignment ahead for Orlando Pirates

The Buccaneers coach will be looking t maintain an unbeaten record against the defending league champions after seeing them off at Orlando Pirates in his only encounter with them.

With one point separating Pirates and Sundowns, the clash at Loftus Versfeld promises to be a humdinger.

“For me, it’s a good game in another ten days, Sundowns is a top team, they play very good football, it’s [another] game like today hey,” Zinnbauer continued. “We’re happy to have the game, the supporters came and supported us and we’ll do our best.

“We want points and it’s a special game for me in the league, we have to focus, I’m happy we can play.”