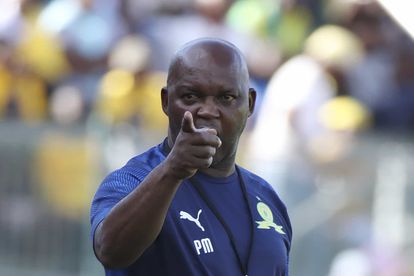 Mamelodi Sundowns coach Pitso Mosimane has made it clear that he wants to stay at Chloorkop and build on his legacy.

As things stand Mosimane will be out of contract at the end of the season, but the coach says an extension is in the hands of the Sundowns board.

The ball is in Sundowns court – Mosimane

Mosimane says that he has agreed to the club’s terms and is waiting to be offered a new deal.

Sundowns quest for a second Champions League title ended in frustration over the weekend and reporters were quick to query the status of contract negotiations. Mosimane is a highly-respected tactician on the African continent and has been linked to big-money deals in North Africa and the Middle East.

“It’s a tough one that one. Remember earlier I said that 80 percent of the contract has been agreed? So I have complied to 100 per cent – to what Sundowns wanted,” Mosimane said after Sundowns 1-1 draw with Al Ahly on Saturday.

“I am waiting for Sundowns now. You can ask Sundowns. I have long complied – the ball is in Sundowns’ court not in my court.”

The reigning PSL Coach of the year grew frustrated with questions about the status of contract negotiations.

“I am sorted now, I have complied with everything, don’t ask me. It’s on the other side, not my side. I am a professional coach, I behave as if I am here.”

The sky is the limit

The former Bafana Bafana coach joined Sundowns in 2012 and has guided them through a period of unprecedented success. Four League titles and a total of six top-two finishes have seen Sundowns become a fixture in the Caf Champions League under Mosimane.

The disappointment of their Champions League exit will be tempered by PSL results. Sundowns title rivals Kaizer Chiefs, and Orlando Pirates dropped points on Saturday in clashes with KZN clubs.

Sundowns are seven points off the pace set by Kaizer Chiefs but have two games in hand. Last season Downs made up ground on Pirates after they were eliminated from the Champions League semi-finals, this season they looked poised to press Chiefs all the way.

It would be highly unusual if Sundowns were not doing their utmost to keep Mosimane at Chloorkop after everything he has achieved with the club.