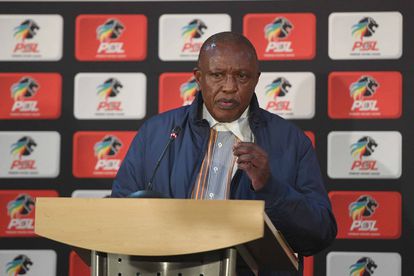 Orlando Pirates’ players have been issued a stern warning by a former Buccaneers striker.

James Mothibi has urged the current crop of Orlando Pirates stars to get their behaviour in check after a string of off-field incidents.

The Buccaneers have been making headlines for all the wrong reasons during recent weeks with Ben Mothswari being involved in an assault case while Gabadinho Mhango was detained at a night club.

Goodman Mosele then made headlines after he failed to appear at the current Bafana Bafana camp without notifying anyone regarding his whereabouts.

“The advice that I gave to Goodman Mosele, I would also give it to those boys (Motshwari and Mhango), who found themselves on the wrong side of things. We don’t know how true it is, but if it is, then they must always know that Orlando Pirates come first and it’s bigger than them,” James Mothibi told Phakaaathi.

“When you play for a big team like Pirates, you’re playing there to better your own life, to better your career, to better the lives of your family, to perform and to be included in the national team.

“They are carrying the names of their forefathers, so they need to protect their names against wrong things in the media or public. If you drink, you must do it at home. Or just do it responsibly and don’t be reckless whereby you get caught by police and you are all over the media.”

Orlando Pirates will next face CSMD Diables Noirs in their CAF Confederation Cup qualifier. The first leg of the clash will take place in Congo Brazzaville and will take place immediately after the current international break.

The latest PSL transfer rumours: Will Kaizer Chiefs get their main target