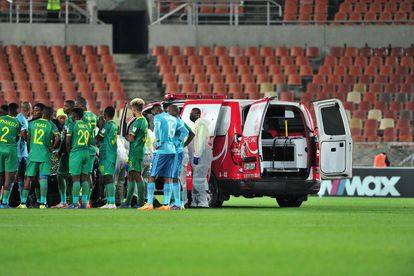 Orlando Pirates have issued an update on the status of Paseka Mako following a horror head injury suffered during their match with Baroka FC on Tuesday.

Following a collision with teammate Richard Ofori, the Orlando Pirates’ fullback was taken to hospital.

During the collision the Orlando Pirates defender was struck in the face by an onrushing Ofori’s knee, leading to concerns around the 28-year-old’s health and wellbeing.

Orlando Pirates star out for the season

Mako was surrounded by concerned teammates in the wake of the incident and would be stretchered off the field and taken directly to the hospital.

Orlando Pirates have now revealed the extent of Mako’s injuries, in a statement issued early on Wednesday.

The club have confirmed facial fractures but crucially the rest of Mako’s skull appears to be intact.

Mako is being closely monitored by medical professionals.

“Following the emergency injury involving defender Paseka Mako in the DStv Premiership clash against Baroka FC last night, Orlando Pirates Football Club can confirm that the 28 year old is in a stable condition,” the club said in a statement.

“The doctor has revealed that CT scan results have shown no signs of skull fracture or any brain haemorrhage however, the player has sustained fracture to the face and nose. He will remain in High Care and will be assessed by the neurosurgeon again this morning.”

It is unclear when Mako will return to full training at this stage but it appears unlikely that he will feature for Orlando Pirates again this season.

Co-coaches Mandla Ncikazi and Fadlu Davids will need to find an alternative at left back where Mako has been a stalwart.

Davids expressed his annoyance at the lack of urgency shown by ambulance staff attending the match.

“The less said about that the better. But, nobody in the ambulance, you don’t know where the drivers are. Are they watching the game?” Davids added.