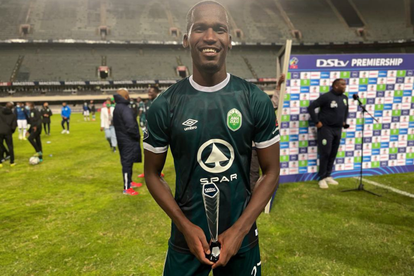 According to this new report, Usuthu’s central defender – Xoki – has been spoken about at Bucs’offices in Parktown, Johannesburg.

The 27-year-old footballer from Khayelitsha, Cape Town, has caught Orlando Pirates’ interest after 136 games for AmaZulu since joining from Old Mutual Academy in 2014.

“AmaZulu defender Tapelo Xoki has emerged as a potential transfer target for Orlando Pirates ahead of the 2022/23 season,” iDiskiTimes reported.

“Technically gifted and a reliable performer in the heart of defence, his leadership traits as one of the captains in held in high regard at Usuthu.

“However the club has made it clear that he will not leave on the cheap, should Pirates make an official move for his services,” the report concluded.

PIRATES TO PLAY THREE FIXTURES AFTER THE SEASON’S ENDS

Pirates will see the Premier Soccer League ‘finish’ this weekend before the mighty Bucs have their own final finishing in June.

Playing on Friday night in West Africa means that the Soweto giants will not be involved in the PSL finale this weekend, the CAFCC exploits have also left Orlando Pirates with three games in hand. Read the full story here.