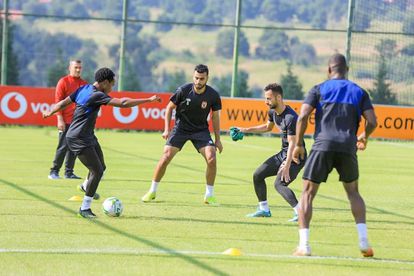 Percy Tau has dropped a transfer BOMBSHELL… Teasing a move to Kaizer Chiefs or Orlando Pirates!

The Lion of Judah could very well roar on the pitches of Soweto.

Imagine, Tau playing in the gold and black of Amakhosi or running out for Orlando Pirates. The possibility of Tau alongside Keagan Dolly and Khama Billiat or even alongside the likes of Thembinkosi Lorch with the Buccaneers.

CHECK IT OUT: PITSO MOSIMANE SEEN GETTING INTO A FLASHY NEW BLUE BMW!

This possibility is now stronger than ever after Tau’s cryptic message revealed his interest in the Soweto derby.

Not just as a neutral fan but as a a player. So what exactly did Tau say and where is he likely to go when he does feature in the Soweto derby

Well, he posted this a couple of seasons ago…

Expressing his interest in the PSL’s biggest derby!

READ | ARTHUR ZWANE SUSPENDED DUE TO FAKE ARTHUR ZWANE’S! DOES HE HAVE TWINS OR DOPPELGANGERS?

How intriguing…so which side of Soweto is likely to join?

Well, Kaizer Chiefs seems the likelier of the two. This, after Tau revealed that he grew up supporting Amakhosi.

Newspaper front pages from around the world, 22 November 2022