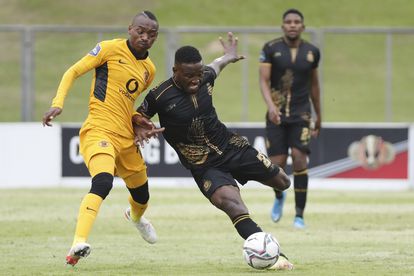 Khama Billiat of Kaizer Chiefs and Victor Letsoalo of Royal AM during the DStv Premiership 2021/22 football match between Royal AM and Kaizer Chiefs at Chatsworth Stadium, Durban on 19 December 2021 ©Gavin Barker/BackpagePix

Khama Billiat of Kaizer Chiefs and Victor Letsoalo of Royal AM during the DStv Premiership 2021/22 football match between Royal AM and Kaizer Chiefs at Chatsworth Stadium, Durban on 19 December 2021 ©Gavin Barker/BackpagePix

Victor Letsoalo has finally broken the silence amidst ongoing rumours of MaMkhize’s Royal AM star joining the Soweto giants – will he join Kaizer Chiefs or Orlando Pirates?

Letsoalo has made his decision – and it is an absolute shocker!

MaMkhize’s star personally responded to rumours around his exit from Royal AM and a potential move to Chiefs or Pirates.

Here is what the Bafana Bafana star had to say:

“No, no, I’m focusing on where I am at this moment. All the focus now is, to maintain the position we at in the league and win the Nedbank Cup. Me scoring goals for Royal AM is the most important thing for me,” SoccerLaduma

This will break the hearts of millions of Amakhosi and Bucs supporters who were hoping to see the talented star join their respective clubs.

However, it will warm the heart of MaMkhize and Andile Mpisane. Knowing there club can hold onto such a talent as they build towards a truly positive future together, Letsoalo and Royal AM.

Letsoalo went on to say this:

“I can’t be stressing about teams that want me, my focus is on Royal AM. No, I was okay, when I was in Johannesburg to sort out my things and people started creating their own stories, saying I wasn’t happy, which is not true.” added Letsoalo.

JUST IN: CHIEFS MATCHES WILL BE REPLAYED REGARDLESS OF HEARING

He is committed to the success of his club which is extremely admirable and respectable.

Letsoalo has a massive future ahead of him no matter where he chooses to play his club football.