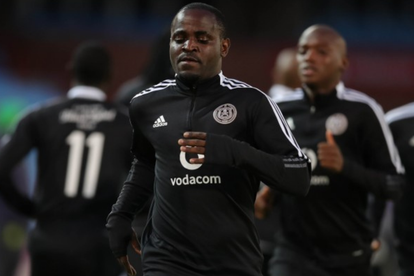 So Kaizer Chiefs are reportedly eyeing to sign Gabadinho Mhango from Orlando Pirates. The Malawian could be the first player to make the controversial switch since Lehlohonolo Majoro in 2014.

As The South African reported this past weekend, the 29-year-old has reportedly reached an agreement to leave the mighty Buccanneers due to scarce game time.

Mhango has only tasted match action 10 times, which is a far contrast to the 32 appearances he made last season.

Amakhosi will once again be on the hunt to bring in better quality footballers for next season. Mhango is PSL-proven with 200 games that include 57 goals and 13 assists.

Kaizer Chiefs, like any of the big clubs in Mzansi, have clear CAF football ambitions. In Mhango you have a player with 15 games in both the Champions League and Confederation Cup, not forgetting his nine goals in 40 international caps for Malawi.

It’s one thing to show your quality at a small club, but scoring and creating goals while wearing the heavy jersey of Pirates speaks volumes. Mhango would not be phased by the pressures that come with the Kaizer Chiefs brand.

THREE REASONS HE MAY NOT MAKE THE MOVE

Kaizer Chiefs’ Director of Football Kaizer Motuang Jnr sent a loud message this season. The Glamour Boys will be rebuilding a squad with a lowered average age. Mhango is turning 30 in September.

Kaizer Chiefs’ best players this season, Khama Billiat and Keagan Dolly play in the same positions where Mhango operates. Mhango would become one of the top earners at Amakhosi but only to be a non-starter? Additionally, Mhango himself wants to join a club where he will be a sure-starter in every game.

We’ve all read the reports on Mhango’s troubles off the field. Some clubs may be a bit tolerant but we can’t really say Kaizer Chiefs are one of them. Read Dumisani Zuma.

Meanwhile, we will keep a close eye on Mhango’s future developments in the coming weeks.