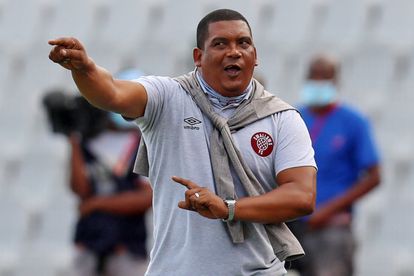 Former Swallows coach Brandon Truter could be back in the DStv Premiership in the ‘new year’.

Truter, who has also coached Richards Bay, was axed by the Dube Birds at the end of November with his side languishing near the foot of the DStv Premiership log.

He had steered Swallows to a sixth-placed finish in the club’s first season back in the top-flight last season, but was unable to repeat that feat this time around.

Truter has been linked with the Maritzburg United job where incumbent coach Ernst Middendorp is under pressure after his side’s poor form this season.

Speaking to Kickoff, Brandon Truter said: “Yes, I am talking to a few teams.

“I am looking and I am also available. I am having a meeting tomorrow and probably will have a new team in the new year.”

Swallows have the fewest wins in the DStv Premiership

Swallows are currently 14th in the 16-team DStv Premiership standings with 14 points after 18 matches.

They have only managed two wins this season and have scored nine goals to date – both those stats are the lowest in the entire league.

Swallows will next be in action away to Stellenbosch FC on Wednesday, 16 February.

Kaizer Chiefs back at FNB – 5 things we expect

‘Bimenyimana will be a big threat’ says Lungisani Ndlela

‘Your child is very demanding’: Murdah Bongz on Kairo

How did Boks lose with these stats against Australia?