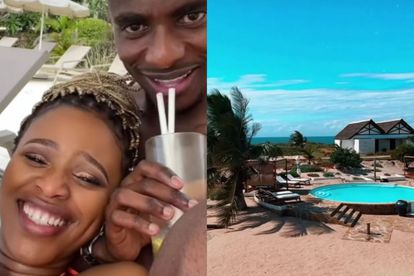 Judging by their Instagram stories posted on Wednesday, 29 June, it appears that South African actress Natasha Thahane and Orlando Pirates star Thembinkosi Lorch are on “baecation” together.

Thahane and Lorch first sparked romance rumours in June 2021 when the pair were spotted on “baecation” in Zanzibar.

Since then, the pair have had an on-off romance.

Their relationship status remained unknown for months until Thahane shocked Mzansi with her pregnancy announcement in March this year.

She is believed to have given birth towards the end of April amid to-this-day uncertainty regarding the identity of the father of the child.

Despite the mystery, many are convinced Thembinkosi Lorch is indeed the “baby daddy” – and they might just be spot-on!

Thahane and Lorch both shared an Instagram stories of the same location where they appear to be on vacation together.

However, noted that the pair are still not following one another on social media.

“Thembinkosi Lorch and Natasha Thahane are on vacation together. The couple who has been going through it with Thembinkosi Lorch cheating on pregnant Natasha. Seem to have patched things up,” he wrote.

“They still aren’t following each other on social media.”

Khawula aso made mention of the report that Lorch cheated on the actress.

“Guys, Social media is not a real place. I am sure those celebrities don’t really care whom follows them,” tweeted @AbelNkwan.

“As long as they are happy, following each other on social networks is not important,” tweeted @fumbanele.

Others thought the vacation was really needed after a baby.

“This is really needed after having a baby,” tweeted @ratosjackson.