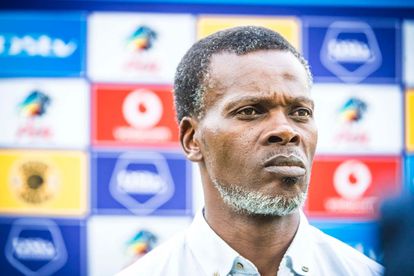 Kaizer Chiefs head coach Arthur Zwane and his side will be looking to get back to winning ways when they host TS Galaxy in a DStv Premiership match on Wednesday, 19 October.

Amakhosi suffered a home defeat at the hands of Chippa United last Saturday at the Moses Mabhida Stadium.

The loss was hard to bear for the Glamour Boys who wanted to hand the club’s chairperson Kaizer Motaung an early birthday gift.

ALSO READ: DSTV PREMIERSHIP MIDWEEK FIXTURES: WHO THE ‘BIG 3’ WILL BE FACING

After the Galaxy clash, Kaizer Chiefs will shift their focus to the MTN8 semi-final second-leg against AmaZulu and Zwane says they will approach the two matches differently.

‘WE WILL GIVE IT OUR BEST’ – ZWANE

“We are taking it one game at a time, we need to focus on the game against TS Galaxy on Wednesday and make sure we do well at home,” Zwane told the club’s website.

ALSO READ: EVERY TEAM TO HAVE QUALIFIED FOR CAF CHAMPIONS LEAGUE GROUP STAGE TO DATE

In other news, after losing to Chippa, ‘10111’ said they had themselves to blame.

The Chilli Boys denied Amakhosi what would’ve been their fourth league win in a row and an opportunity to top the DStv Premiership standings.

Heading into the match, the Glamour Boys are fifth in the table with 17 points after 11 games.

‘Mangethe’ was left disappointed by the overall performance of his charges.

ALSO READ: ROMAIN FOLZ ON WHY AMAZULU APPOINTED HIM

ZWANE REFLECTS ON LOSING TO CHIPPA

“The game was evenly balanced, we could have gotten the second goal to kill the game off, we had about two chances before they equalised,” Zwane told journalists in the post-match press conference.

“Then from there, we had another two chances just before they scored the second goal, lacks of concentration from both goals.

“Cross and we’re not ready to defend properly in terms of body positioning at the back and the ball hit Hlanti and fell into their path and they equalised.

“Their second goal [was] from the dead ball situation, I didn’t see properly, I don’t know whether it was a deflection or something, I’m not too sure.

“But again for me soft, but yes if you don’t defend properly you’re bound to be punished and we were punished.

“And then from there we got about four clear chances, talking ones v ones with Keagan [Dolly], Caleb [Bimenyimana], Reeve [Frosler] that could have played a cut back, also Khama.

“We could have easily…from those we made a lot of mistakes at the back today but those four chances we could have maybe buried too and win the game but it wasn’t to be and we have ourselves to blame.“